Sydney FC coach Graham Arnold revealed he told his players at half-time that he’d rather lose the Grand Final than not play the way they had all season.

A cool, clear night and a decent pitch saw Sydney FC win their third A-League Grand Final after beating Melbourne Victory in a dramatic penalty shoot in front of 41,546 at Allianz Stadium in Sydney last night.

With the score deadlocked at 1-1 after full-time and extra time the Grand Final was decided via the dreaded penalty shootout.

The contest came to life when Melbourne Victory scored the opening goal in the first half thanks to one the great A-League Grand Final goals from record breaking goal scorer Besart Berisha.

With Sydney struggling to impose themselves on the game, Arnold told his players at the break that they needed to revert back to the record breaking style of play that had brought them so much success during the season.

“At half time I basically just said to them I’d rather lose and not play our way the way we’d play all season,” he said.

“The way we created history with a lot of things and I wanted to play our way in the second half.

“I thought it was a real cup final. It was a very physical game a lot of free kicks and fouls lot of passion but the first half was difficult and second half once I got them in at half time we just talked about being brave to play.”

“I thought that the first half we didn’t play our way. We ended up playing a game of kick and rush and fighting of the second ball and when you have the quality of players like Ninkovic and Brosque and those type of players it’s not that type of game.

“I’ve been through that before what Melbourne are going through now when I was at the Mariners, it’s not the greatest way to win or lose but it’s the way it is.”

Arnold revealed that Sydney were ready to match the physical tactics that Melbourne Victory employed during last night's contest.

“In the first half we didn’t get our fullbacks involved at all and second that was much better.

“There was a lot of fouls but the most important things was that we had to match the fight.

"There was no issue about that at all there was a lot of fouls off the ball and a lot of break down in play in tackles but if we had not been prepared to match that fight then we would have had a more difficult night.” 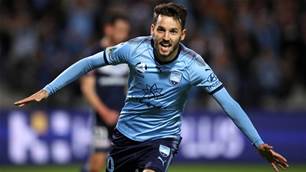 Ninkovic: Some team was going to get smashed