After two years and 11 qualifiers on the road, Mabil is adamant that last month’s 2-1 loss to Japan in Tokyo - a result which ended a record breaking run of 11 straight victories - will be exposed as but a blip in what will prove a triumphant return to Australia.

“Now that we are coming home it’s going to be electric because we’ll have that buzz behind us,” the FC Midtjylland flier told FTBL.

“There can only be magic that will happen.

“We want to create history, and we have done a little bit of that already, but there’s more to come because this is such a good group of players and a great staff.

“There can only be greatness coming up for us.”

The Socceroos must beat Saudi Arabia - who have won all four games to date - to return to Group B summit and resume pole position in the race to reach Qatar 2022.

The Saudis have played three of there four games at home and will not be relishing the journey Down Under.

“We treat every opponent the same and focus on ourselves and try and get the job done,” added Mabil.

“If you analyse the game against Japan we were quite unlucky, the two goals we gave them we normally wouldn’t concede goals like that.

“We’ve managed to make away games like our home games and I think we could’ve taken a point from that one.

"But some things are there to make you stronger and that’s how we take the outcome of this game.

“What people have been seeing is only the beginning of what we can all offer.

“We haven’t been able to be at home for two years and have had to adapt to that, but despite that situation we made the best from it.

“That’s what has united us the most because we had to pull together to create a home away from home.

“Every time we go out there we try and find ways to win.

“I have a big belief in this group  of payers - there is a mixture of experience and young players. It’s a perfect mix of energy. So when we’re on the field everything will take care of itself.

“Everybody is there pushing each other - it’s a healthy competition to ensure every player is on their toes.”

With his contract with the Danish Superliga leaders winding down and a desire to explore fresh pastures after nearly six years on their books, Mabil has found first team minutes harder to come by this season as Midtjylland look internally for replacements.

He’s made only nine league appearances - scoring once - but isn’t letting his focus falter, despite interest from England, Germany and Spain

“I’m working harder than I’ve ever worked because I need to be ready for when I do play and also ready for my national team," Mabil explained.

“It’s such an honour and I have to be ready when I’m called on. I’m in a good place mentally, I’m happy and physically I’m great.” 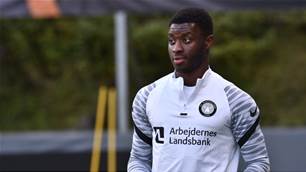 Mabil inspiring his Aussie protege to dazzle in Denmark