Central Coast coach Alen Stajcic says the eyes of the football world will be on the A-League tomorrow as his club seeks to end a horror run of nine defeats in a row.

The Mariners will take on Melbourne City at home on Friday afternoon behind closed doors.

With most profesisonal football around the world shutdown because of the Coronavirus, Stajcic believes this game will have extra global attention and has additional importance.

"To give all our fans a bit of relief from all the other worries they've got currently," he said.

"To think we're the only game going on in the world, there's going to be a lot of eyes on us.

"We're probably going to get some attention from people across the world who don't have any other football to watch, so there's a lot of things going on in society but there's going to be a football match going on.

"We're going to have a lot of eyes watching us, so that's something to look forward to."

Central Coast remain rooted to the bottom of the A-League ladder, with just four wins from 21 rounds this season.

But Stajcic insists his team is not focused on avoiding that record.

"Melbourne City is tough enough without worrying about what's happened in the history of the club. It's a tough game for us tomorrow. Melbourne City are a good side, they're sitting in second on the ladder so there's a lot to play for against a quality opponent.

"We're seven points behind Melbourne Victory so we've got a bit of a gap to make up to try and get off the bottom, which is our short-term goal." 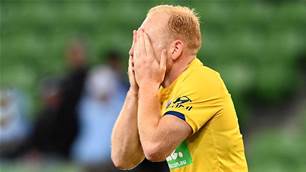 Top of the table, but lessons still to be learnt for Melbourne City after Mariners win

Remembering the most dominant women's team in Australian history