Perth Glory CEO Tony Pignata is confident his club can catch up their A-League fixtures by the end of February despite their wait to kick off being extended.

The start to Perth Glory's A-League campaign may have been delayed again but chief executive Tony Pignata expects to have caught up to the competition by the end of February.

A fortnight after the 2020/21 season kicked off on December 28, only one team - newcomers Macarthur FC - have completed three fixtures.

In contrast, Perth are yet to play a single match and their scheduled start of January 16 against Adelaide was pushed back to January 20 in middle of last week.

It means most A-League teams will have played at least three games by the time the Glory take to the field for the first time.

"Initially we knew we were going to have to be behind a few games," Pignata told AAP.

"There's room to play weekend, midweek, then weekend and catch up. We were hoping to have everything caught up by mid-Feb, maybe now end of Feb, but it really depends on what happens with state border closures.

"Close borders and teams can't come to us, we can't go to them ... we're just hoping things improve quickly."

The decision to push the Adelaide clash back by four days came with last Thursday's decision that Perth's home match against Brisbane Roar on January 20 would be postponed.

A date for that match is yet to be arranged as is a revised date for the Roar's home match against Melbourne Victory, which was to be played on Sunday but had to be postponed last Friday when the Queensland government placed the greater Brisbane region into a three-day lockdown.

That decision meant just two matches could be played on the weekend.

Carl Robinson celebrated a winning return to Newcastle on Friday as his Western Sydney Wanderers defeated the Jets 2-1 while Wellington Phoenix and Macarthur couldn't be separated in a 1-1 draw at Campbelltown Stadium on Saturday.

That match is the Phoenix's last until January 24 as the COVID-19 pandemic continues to put pressure on the competition's scheduling.

Central Coast, with two wins from two matches, remain top of the league, but Sydney FC, Western United and Victory have only played one match so far this season.

If Brisbane's lockdown extends beyond Monday, it will create further headaches but suspending the season is a situation Pignata said the competition is keen to avoid.

"Am I confident? No. I don't think you can be confident when things change every hour," Pignata said.

"The aim is not to have a break in the A-League but we're going to be dictated by each state and how they respond to each other state." 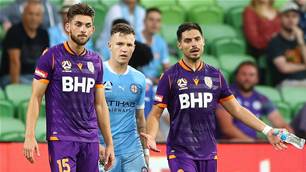 'No game - but stay excited!' - City's trip to face Glory to be postponed