To understand Jamie Young is to grasp his approach to mindset, meditation, and psychology. Here, the A-League fans' player of the year reveals the mental strength behind his dazzling displays in goal.

“To focus on one thing you have to dissolve the many distractions,” the Brisbane Roar keeper tells FTBL.

He was voted by A-League fans as the best player last season.

It’s rare that a keeper wins such a fans' award.

And Young’s story is both inspiring and a testament to his mental strength and growth mindset.

The Roar keeper was dropped at the start of last season.

He had to adjust his game and fight his way back into the starting XI.

Enjoy some of his outrageously good saves below

Did you know the star keeper is a Ph.D. candidate at the University of Queensland?

He’s specialising in the Psychology of Sports Coaching.

Two and a half years to go and guess what?

Perhaps he’ll still be pulling off outrageous saves when he has Dr in front of his name?

It’s this growth mindset that has seen this footballer also gain a Bachelor in Exercise and Sport Science.

The 35-year-old wrote his dissertation on human genomic research in professional football.

He signed up after over a decade in the UK.

He applies much of what he’s learning to his A-League career and how he implements a mindset philosophy into his life?

“I like philosophy and an understanding of human motivation," he says.

And that can be seen on game day, as the shot-stopper reveals here to FTBL.

“I like to keep it pretty relaxed and not think about football.

“I would’ve already meditated by then.

“I’ll probably read a book, have a coffee, eat something like poached eggs, spinach, toast, and avocado and have a stretch.

“What I like to achieve going into a game is quieting the mind down and focusing the mind solely on the game.

"Little wins in the day away from the sport.

“People have negative thoughts and self-doubts about the past and future.

“Whereas I have the opportunity to focus on the one thing for 90 minutes.

“By living in the present moment.

“I keep the reading not sport-related.

“Actually, I remember getting off the bus in Shanghai reading a book called ‘The Subtle Art Of Not Giving A F***’.

“It was before we beat Shanghai Shenhua 2-0 when they had Carlos Tevez.

“Talk about not giving a f***! Tevez was on like a million a game!

“After a chicken/salmon and veg lunch, I’ll sleep and quieten everything down before changing and going to the stadium.

“I definitely don’t get a feel of a football.

“I like to try not to think of the game at all.

“And lead you down a path of anxiety and what-ifs."

“I'll arrive at the stadium about two hours before the game.

“I set my gear up, a bit of banter with the players and there’s usually a team talk.

“I’ll then meditate for 10 minutes.

“To focus on one thing you have to dissolve the many distractions.

“Then there’s my pre-activation routine and I might listen to some music in my ears.

“They have this new album and some songs are like 15 minutes long!

“I used to listen to Slipknot, Metalica, Pantera, too.

“Then I’m ready to go to war

“I also look at images of inspiring saves.

“It’s a bit corny but I like to visualize what other keepers are doing to inspire me to perform.

“When the game comes that’s when we think about the game.

"And that’s a great thing to be thinking about.

“Not thinking about mortgages or bills or charity work, study, or coaching.

“It’s one chance to be part of something that matters to people.

“I really immerse myself in the moment."

READ MORE Jamie Young explains to the official A-League site about his sports psychology and study
CLICK FOR OFFICIAL Brisbane Roar site
To book Jamie for speaking, appearances, corporate or charity events, or for ambassadorial roles contact Jamie at: info@jamie-young.com.au 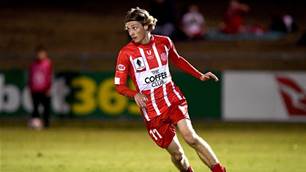 Brisbane Roar add local NPL talent: ‘In the past, I may not have been ready’