Graham Arnold chose consistency this match and started nearly the same line-up as the previous qualifier against Vietnam.  His only changes were Martin Boyle replacing Riley McGee and Brad Smith being swapped for Aziz Behich.

The day was a special one for Rogić, who picked up his Australian 50th cap during the match.

A huge congratulations to @Tom_Rogic, who is set to earn his 50th @Socceroos cap 🙌

Due to current COVID-19 restrictions, the Australian home match was being played abroad at the Khalifa International Stadium in Doha, Qatar.  The Socceroos were the first to get on the scoresheet.

The first goal came courtesy of Mabil in the 9th minute.  A cross into the box deflected.  Mabil pounced on the loose ball and opened the scoring for the Aussies.  It was Mabil's second goal of the  qualification, having scored earlier this year in Australia's match against China PR.

The Aussies were then pressured minutes later, with Abdullah Al Alghabari picking up a ball off Irvine and taking a shot on goal from just outside the penalty area.  Mat Ryan was able to save it by deflecting the ball over the crossbar.

Rogić looked like he would celebrate his 50th cap with a goal. The midfielder's picked up a good pass from Behich and was able to enter Oman's penalty area and unleash a shot.  This time it was Oman's goalkeeper's turn to deflect the ball over the bar.

Oman's Al Mandhar Al Alawi then got the equalizer in the 28th minute.   A good cross into the box was picked up by Omani captain Mohammed Al-Musalami.  He was able to get it to Al Mandhar who then managed to get past three Aussie defenders and shoot a strike into the back of the net.  It was the first time in seven and a half hours that Australia had conceded a goal.

Australia had the majority of possession the first half but significant parts of the half were quite open.   Both teams had nearly equal amounts of shots on goal and went to the dressing rooms at the half with the scoreline equalized.  Upon their return, the Aussies started well and quickly found a second goal.

In the 49th minute, Taggart received the ball inside the 18-yard box.  He quickly took a shot onto goal which seemed to catch Omani goalkeeper Al-Rushaidi offguard.  The keeper was not properly placed and only managed to deflect Taggart's shot.

That deflection found Martin Boyle.  The Hibernian striker was well placed and managed to head the ball in to make it 2-1 for the Australia. It was Boyle's fifth goal for the Socceroos.

Oman were then lucky in the 56th minute.  Boyle was clearly pushed from behind by an Omani defender in the 18-yard box when a ball was being floated in his direction. Despite Australian objections, the referee did not award a penalty.

A double change occurred fifteen minutes later for the Aussies, with Mitchell Duke and Aaron Mooy coming on for Rogić and Taggart. This was followed by Omani substitutions a few minutes later.  Both sides took chances on goal, with Oman pressuring the Aussies on a number of occasions over the next twenty-four minutes to no avail.

Another double substitution was done by Australia in the 80th minute.  James Jeggo and Fran Karačić came on for Irvine and Grant respectively.

Two minutes later, Duke got a good chance at goal.  A ball was floated in and the substitute tried to head it in.  It went just wide of Oman's goal.

A final change for Australia occurred in the 86th minute, with Boyle coming off and being replaced by Chris Ikonomidis.  It was the first appearance for the Australian based player since July.  Ikonomidis has chosen to go to both matches and quarantine upon return.

The Aussies were able to make it three in the 89th minute.  A great pass into the box by Karačić found Duke who was just inside the top of the box. He was able to nicely deflect it past the keeper into the back of the net.

The Socceroos finished this Matchday three with a 3-1 win against Oman with Martin Boyle being named man of the match.

It was the eleventh consecutive World Cup Qualifying win for the Socceroos, a historic record in world football.  Australia beat a previous record previously jointly held by Mexico, Spain and Germany.

The win propelled Australia to the top of Group B in this Third Round of 2022 AFC World Cup qualification.  Undefeated Australia are ahead of second place Saudi Arabia on goal difference and six points ahead of third place Oman.

The Socceroos next meet Japan on Matchday four.  Japan have been struggling of late.  Despite being the highest ranked team in the group, losses to Oman and most recently Saudi Arabia and a single win against China have placed the Japanese at third in Group B. 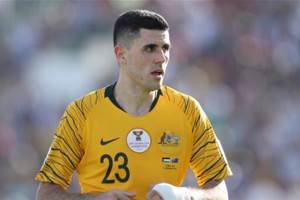 The Socceroos' next game will take place on Tuesday, October 12 at 9:14PM AEDT and is being broadcast live and free on 10 and 10 Play.