Both Maker and Athiu left war torn South Sudan with their families when they were youngsters and moved to Australia as refugees.

Maker, 20 took up basketball when he came to Australia and was the number 10 pick in last season’s NBA draft. His rookie year saw him end the second half of the season as a regular first team starter as the 221cm centre helped Milwaukee make the NBA play-off finals.

While Athiu, 24 found football in his homeland and has continued his development in the Victorian NPL with Heidelberg Warriors. Last season he won the players player of the season award and this term his goals have helped the Warriors to the FFA Cup quarter final and Victorian NPL grand final.

After initially struggling for game time at the start of the season, Maker received quality minutes from Bucks coach Jason Kidd who overlooked established stars such as Spencer Hawes, Greg Monroe and John Henson.

After a regular season win over Brooklyn Nets, the 20-year-old told Inside Sport about his desire to inspire young people from his birthplace which has been ravaged by civil war since 2013.

“South Sudan needs sports,” he said. “It’s the only way because we are trying to create peace and it’s going to take a while. Sport is one of the biggest ways to get people involved and get everybody to interact together because it’s a world language that everybody speaks.

"I just have to play my role on the basketball court and make sure I do well so when they see that they can get inspired to do the same thing I do.”

Maker was still playing in high school when he became the 10th overall pick in the 2016 NBA draft.  So, when Inside Sport spoke to him midway through the season he was still pinching himself about playing in basketball’s big show.

“I know the standard part has hit me but the fact that I’m in the NBA is still kind of weird,” he said.

“You are just in the motions but sometimes when I talk to my old fiends they get the big reaction they say, ‘oh he’s famous’ and this and that but I keep on telling them treat me the same way that you always have because I’m not changing.

"I’m a step – two steps higher in my basketball level but also, I have a job now. This is a job so I have to find a way to get better every single day and I’m focused on that.”

“I’m definitely happy for him,” he said speaking exclusively to Inside Sport last season. “He is very talented. He’s going to be great player in this league for a long time. A lot of South Sudanese kids fled home and they grew up in a different country.

"Basketball allows you to forget about everything that is going on and allows you to play the game and show your talent and he’s done a great job taking the opportunities that he’s had.

“It’s natural for players from South Sudan to work hard and Thon has done that. He’s just got to keep doing that. He has the talent he has been drafted high and now that he’s in the NBA he’s just got to keep working on his game and keep believing in himself.”

Athiu is in his third season for Heidelberg and this term has been his best ever after he finished the Victorian NPL as its top scorer with 21 goals. He revealed that Maker is one his biggest inspirations as he looks to make his own mark on the round-ball game in Australia.

“Thon is playing at the best level as he can play in and that is where we all want to be,” he said speaking exclusively to FourFourTwo. 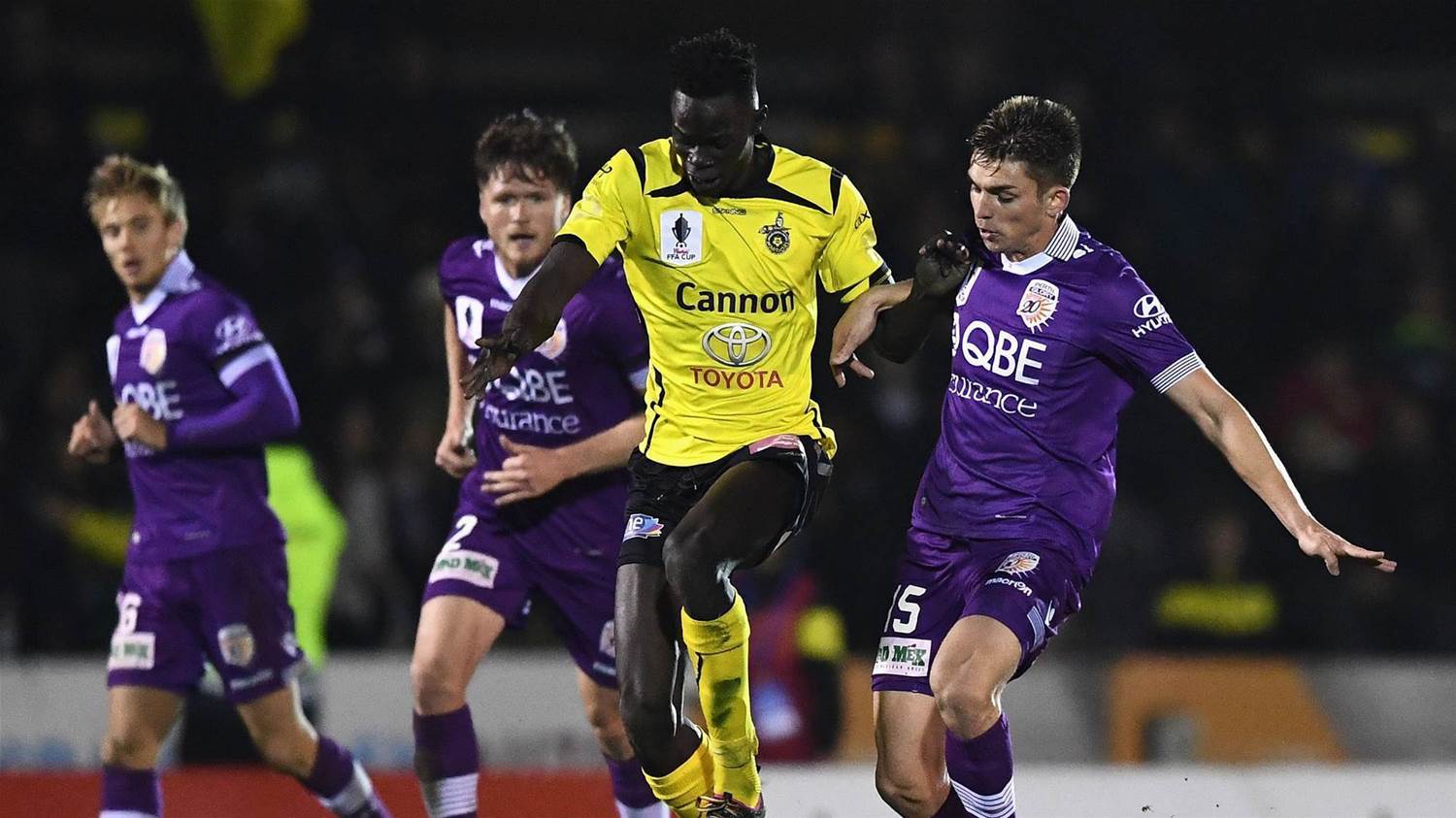 So obviously him being at that level you just look at that and think, ‘damn I’d love to be playing with the best players in the world.

“He is one of those guys you look to and try and be inspired by and emulate and I want to be playing at the top level like Thon.”

The next week see’s Athiu figure in two of the biggest games in his burgeoning football career. First is Sunday’s Victorian NPL grand final followed by a massive FFA Cup quarter final next Wednesday against Adelaide United.

His winning goal in the round-of-32 win against A-League side Perth Glory put the 24-year-old striker on the national stage and Athiu feels those kinds of moments are inspiring the South Sudanese locals.

“My community has been massive in terms of pushing and supporting me,” he said. “Every time I go to community events they say things like, ‘well done Kenny we saw you on TV and we want you to keep going.’

“I am constantly getting messages from friends, family and people in the South Sudanese community who are saying can you get us tickets so we can come watch the game.

"This weekend’s Grand Final and the FFA Cup game against Adelaide game there will be quite a few South Sudanese boys and girls who will be there to support me as well.

“We support each other no matter what we do and I’ll do the something for them no matter what career path they chose to follow as well. The support is actually immense.”

The Victorian NPL where Athiu plays is the tier below the A-League and the 24-year old hopes to take the next step in his career, not just for himself but for his people.

“Being a full-time professional would create more positive news about members of the South Sudan community,” he said.

“It would provide a platform where I can show what my community can offer to Australia and the way that I look at it, positive news about our community is the biggest thing we need right now.”