The pressure was on Ange Postecoglou ahead of the mid-week Scottish League Cup match against Raith Rovers.  The Australian coach was on back to back losses, having lost a total of six competitive games since taking over the Glaswegian club.

Postecoglou has had a difficult start with Celtic FC after his squad was hit with a number of injuries.  The coach described the situation last week as "not great" with the injuries having lead Celtic to being "in a constant state of flux."

The team eased through this quarter-final though, getting a 3-0 win against second-tier Rovers with goals from João Filipe, Liel Abada and David Turnbull.  The game saw Socceroo Tom Rogić start and play 69 minutes.

His Socceroo teammate Martin Boyle also featured in the Scottish League Cup this past week.  Boyle has been having a terrific season with Hibernian, his eight with the club.  He is currently the top scorer in the Scottish Premier League.

Boyle continued to show his fantastic 2021-22 form in Thursday's Scottish League Cup match against Dundee United.  Hibernian won the encounter by a scoreline of 3-1.  Boyle's goal was the third for the Edinburgh based club, a penalty scored in the added time of the first half.

This brought his 2021-22 goal tally for Hibernian up ten, having also scored three in the UEFA Europa Conference League. This is a remarkable accomplishment and puts Boyle five away from his previous yearly record with Hibernian from last year, where he finished the season with fifteen goals in all competitions.

With these quarter-final wins Celtic and Hibernian have both progressed to the next phase of the Scottish League Cup. The semi-final classes are scheduled for November 20, 2021 with Celtic  facing St. Johnstone and Hibernian facing Rangers FC.

The next clashes for Australians in Scotland are scheduled for this weekend in Matchday 7 of the first phase of the Scottish Premiership.

Celtic next play Dundee United at home in the Scottish Premiership on Sunday, September 26 while Hibernian face St. Johnstone. 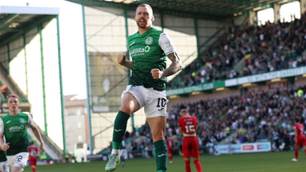