On an individual player level, the Koreans did have the edge over Australia on Wednesday morning.

But the way that both teams were selected and organised, what they tried to accomplish both with and without the ball and the intent both sides showed when in possession served to colossally magnify the difference.

If there was one moment that could serve as a microcosm of the differences between the quality and intent of the two side's attacks, it was demonstrated in a late first-half chance from Dae-won.

Receiving a bouncing ball between his legs as Korea stamped out an attempted break, his first instinct wasn't to quickly move the ball on but, instead, look to turn and face goal.

A backheeled touch to swivel towards the Australian penalty area completely neutralized Cleur and Baccus alongside him, and his subsequent move to take him around Mourdoukoutas opened up an angle that gave him enough room to launch his shot inches wide.

It was, in the words of Ned Zelic, a moment of individual brilliance that Australia lacked on Thursday morning.

The 22-year-old was, without a shadow of a doubt, the best player afield on Thursday morning, giving the Australian defence fits in both wide positions and centrally.

While his 56th minute goal was a relatively simple finish, the quality of his play and chances created probably would have justified one or two more.

Dae-won.was a regular starter for K-League side Daegu FC during the 2018 domestic season, scoring seven goals and adding four assists across 44 appearances in all competitions.

A regular part of Korean youth-sides, one would think that, if he can continue to turn in performances as he did on Wednesday, a senior international call-up would soon be forthcoming from senior national boss Paulo Bento – as well as a possible move to Europe. 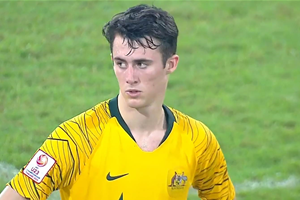 As mentioned, Australia will have a second chance to qualify for Tokyo on Saturday night when they meet Uzbekistan, who were vanquished by Saudi Arabia in the tournament’s other semi-final.

But while the Uzbeks don’t have the same name-brand value as South Korea, there can be no mistake made in the lead in; Australia will be underdogs in that game.

Champions of the AFC U23 Championships in 2018 under Ravshan Khaydarov, the Uzbeks, now under the guidance of Ljubinko Drulović, gave as good as they got against a very good Saudi Arabia and were only eliminated by an 87th minute strike from Nasser Al Omran.

As their 2018 title coming in a tournament that wasn’t tied to Olympic qualification, the While Wolves will be desperate in Saturday's contest; looking to secure their first-ever berth at the Games.

With the lessons of the semifinal hopefully heeded and an ability to start the likes of Tommy Deng, Piscopo and Denis Genreau, there is scope for Australia to put in a much-improved performance on Wednesday.

One will be needed, because what was produced against South Korea won't be enough against the Uzbeks.