Belying what was soon to come, Victory took the lead in just the fifth minute of Saturday evening’s contest after a piece of individual brilliance from Marco Rojas broke the game open.

Seizing upon a loose ball after Storm Roux nipped in to poke it away from Milos Ninković, the Kiwi attacker turned and drove towards goal, split Paulo Retre and Luke Brattan, rounded Alex Wilkinson with ease and hammered an effort beyond Andrew Redmayne.

Breaking into the Sydney penalty area after picking out an attempted diagonal ball from Ryan McGowan, Elvis Kamsoba spurned a golden opportunity to double his side’s lead when he hammered his subsequent right-footed effort wide.

A minute later he and his side were duly punished when Ninković, after being found inside the area by Kosta Barbarouses, sold some candy to Roux and slid an equaliser home.

Having blunted the Victory assault, Sydney then turned on the jets in the second half.

They made it 2-1 in the 64th minute when a short corner routine eventually allowed Anthony Caceres to blast in an effort off the far post and in and it was 3-1 two minutes later when Adam le Fondre, despite the best efforts of Giancarlo Gallifuoco, dinked a shot over the top of Lawrence Thomas after being found by Rhyan Grant in transition.

Adding insult to injury, a late infusion of the pace and power of Trent Buhagiar off the bench won Sydney a penalty when, unable to run with the 22-year-old, Tim Hoogland brought down the Sydney substitute inside the area.

As the German marched off after seeing a red for the challenge, Barbarouses struck two to make it four.

“We didn’t have to change too much [at halftime],” Sydney gaffer Steve Corica said post-game. “I was pretty pleased.

“With the [Victory] goal we were a little bit sloppy, of course, but it took us a little while to get going.

“But we definitely dominated the game, definitely was outstanding character to come back. Very pleased for the boys.

“It’s been a tough week, three games in a week is never easy, especially after a loss against the Wanderers last week, everyone was waiting to see how we would go – especially with a difficult game in the ACL on Wednesday.

“I thought we were physically fitter than them, we were stronger and full credit to our strength and conditioning, head of high performance, the boys were outstanding.”

Victory boss Carlos Salvachúa, conversely, was in a dour mood post-game – cutting a more downcast figure in the Victory press conference on Saturday night than he has after any previous loss.

“I think that the problem was that we didn’t respect the structure in the second half,” the Victory boss said.

“It’s totally different, the defensive structure. And when you are playing like a team like in the first-half the team can support you.

“But if you want to play individually you just depend on your quality and in the second half, we saw a big difference in the quality. We created the same number of chances, but we didn’t score.

“And we opened the game for them because we stopped doing the movements like in the first half.

“The team without a structure is not a team, it’s just individual players.”

The Sky Blue Machine Rolls On

Sydney’s strength throughout the season has been built upon their mental indefatigability; Corica’s side able to find a way to deliver three points regardless of whether their performance was good, middling or even poor.

Indeed, one could even describe Sydney as operating in the Jason Vorhees mould: if you think you’ve done enough to put them down, you probably haven’t and when you turn your back after failing to deliver the coup de grâce, they will strike.

Such was the case for Melbourne Victory on Saturday night.

Taking an early lead thanks to Rojas’s moment of early brilliance, the hosts were doing a decent enough job of soaking up the Sky Blue onslaught and, despite surrounding the majority of possession and field position, doing enough to deny their foes clear goalscoring opportunities.

But, in a moment that would be humorous if it wasn’t so maddeningly predictable, Kamsoba’s inability to make it 2-0 in the 43rd minute was immediately punished up the other end when Ninković fired home.

Even before that moment, the side in navy blue had created, despite seeing less of the ball, more clear-cut chances but had been unable to deliver a moral blow and probably should have been two or three goals to the good.

But if you don’t punish Sydney you will be punished, and the defending A-League champions once again showed why the road to the 2019/20 A-League championship goes through them with their blistering second-half.

“It’s a bit of everything,” Corica said on his side’s mental strength.

“We have a lot of experienced players but also a lot of younger boys. The senior players really teach the younger ones the right way to do it.

“And you can see when the younger ones come on as well, they were outstanding. They created, gave us legs as well. Obviously, Trent [Buhagiar] created the last goal.

“It’s just installed in the club and the culture that we have that that’s the way we do it.”

Will Elvis Leave The Building?

Without a doubt, Elvis Kamsoba’s journey to the A-League has been a feel-good story.

Moving from the South Australian NPL to Victoria’s in an effort to attract the attention of A-League scouts, the former refugee was able to parlay standout campaigns with Melbourne Knights and Avondale FC into a contract with Melbourne Victory.

A regular starting place with the four-time A-League champions, an international call-up for Burundi and a first goal for Victory – against Bali United in the 2020 Asian Champions League – then followed.

Unfortunately for Kamsoba, that goal against the Indonesian champions is remarkable not just for being his first goal, but for also being his only goal in a Victory shirt.

The 23-year-old has played 34 A-League games since he first joined Victory but, in that time, hasn’t registered a single goal for his club.

Of course, this profligacy can’t be observed wholly in a vacuum.

Robbie Kruse’s injury has placed an increased burden on Kamsoba by not only by forcing him to attempt to replace the Socceroo attacker’s production but also through robbing him – and the rest of Victory for that matter – of a much-needed reference point.

An inability of the likes of the much more highly credentialled and paid Toivonen and Andrew Nabbout across the length of the season has also meant that Kamsoba’s lack of production has been more noticeable as it has more often come in moments were Victory really needed it.

But, nonetheless, the lack of offensive production for a side chasing finals football is one that can’t be excused forever.

Stick a fork in Melbourne Victory?

Much had been made of Victory seemingly saving their season with their 2-1 win over Adelaide United in round 20, Andrew Nabbout’s late winner celebrated as keeping them in the finals race, but tonight's defeat may just draw a line through Victory’s season.

Though they remain a mathematical chance to play finals football – sitting just seven points back of sixth-placed Western United – perhaps only the most ardent of Victory fans would contend that they remain an even outside chance of actually crashing the finals party.

“We’ll see, talking about numbers,” Salvachúa said. “We will see what happens.

“But now we miss players [Hoogland and Gallifuoco] for the next game, and it will be more difficult then it was 45 minutes ago.” 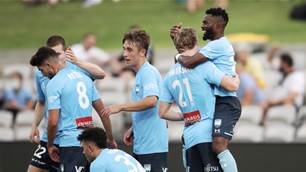