Storming ahead thanks to a brace from Besart Berisha and a calamitous own goal from Central Coast defender Kye Rowles, United did it easily as they snapped a two-game losing streak and consolidated their hold on a finals spot.

For the Mariners, who crashed back to earth after their rollercoaster win over Melbourne Victory the week prior, the defeat keeps them second-bottom on the table as the league begins the second half of its season.

Having had a much-needed bye to rest aching and fatigued older bodies, United got themselves ahead after just six minutes after Alessandro Diamanti, spinning away from marker Gianni Stensness, sent in an absolutely gorgeous left-footed cross to the penalty spot that found the head of Besart Berisha and was subsequently sent home.

Though a speculative effort from Milan Duric followed, United kept up the pressure and was 2-0 ahead in the 18th minute Connor Pain stormed down the left and whipped a cutback across the area that, after skittling everyone, found the feet of Josh Risdon.

And while the Socceroo defender’s shot went straight into the shins of Rowles, its subsequent change in direction favoured the hosts as it rocketed into the back of the net.

Three minutes later it was 3-0 and, for all intents and purposes, game over when a dancing run down the left flank from Max Burgess produced another cutback – this time to the top of the six-yard-box – that Berisha, after another unfortunate deflection off Rowles, tucked home.

The party, however, stopped for United just ahead of the half an hour mark when Diamanti went down with an injury and was forced from the field.

Though United would have the ball in the back of the net once more in the 37th minute – Pain’s strike called back for the barest of offside call margins – the home side’s verve departed with the Italian maestro – even if their control of the game remained.

Burgess had a half-chance to make it four just before the half, before Jordan Murray – who was the lone bright spot for the Mariners – almost produced a spectacular bicycle kick after a cross from Tommy Oar was nodded onward by Danny De Silva a minute later.

Panagiotis Kone would hit the bar in the 55th minute after being found inside the area by Pain, before Berisha fluffed his attempt at a hattrick a minute later after being picked out in the area by Burgess. 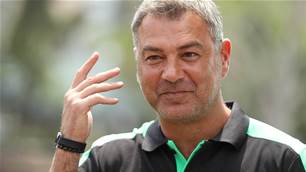 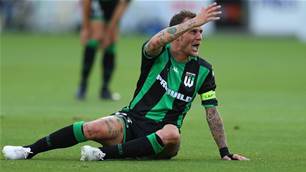 'My eyes aren't the best - but I saw them as pretty clear penalties...'