The Wanderers and City clash on Wednesday at Lily's Football Centre.

The NSW NPL side reached the last eight after knocking out the Central Coast Mariners and APIA Leichhardt.

Western Sydney have already played the Demons as part of their pre-season work.

Thwaite said the Wanderers want a place in the semi-finals.

"We've done our analysis and our homework on our opposition and we're ready," he said

"When it comes to games, competitive games, we want to win everything. I think the FFA Cup is a great way to shorten that pre-season and it's a great chance for the small teams to knock off the big ones.

"Again, we're taking it very seriously and we want to win every game that we play in, whether it be a friendly match, FFA Cup or a regular game in the season. I've been part of two FFA Cup finals with Perth Glory and it really made the pre-season really a lot easier because the final is in the pre-season as well.

"The longer you can stay in it the better I guess. We're really focused on the this game. Who wouldn't want to get to the semi-finals. We're one game away from that and hopefully we can come up with the win."

Thwaite joined the red and black after being released by Chinese club Liaoning Whowin in February. The former Perth Glory, Gold Coast United and Melbourne Victory centre-back described his return back to Australia as "comfortable".

"Coming from China it's a lot different than back in the A-League," he said.

"But this almost my tenth season in the A-League so I'm pretty used to the pre-season. But I'm learning a lot from Tony and the staff. I think the competition for spots is very high at the moment. I think we've got two players for every position and I think that's a good thing."

Western Sydney have impressed in pre-season and have won all five of their friendlies, apart from a 3-1 loss to Arsenal. Some pundits are tipping them to be title challengers next year.

Thwaite said the start of the new A-League season will be a different kettle of fish.

"I'm very cautious when people are talking because pre-season is for preparation, competitive games and the FFA Cup," he said.

"But come round one it's a whole new can of worms. You can be so prepared during pre-season and then come round one any team can come up trumps. We're very cautious of what we're doing and how we're preparing, everything's for a purpose." 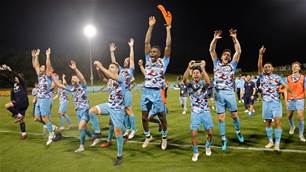