The Far North Queensland Premier League is in the fifth tier of Australian men's football.  One of its community clubs, made up of twenty-seven amateur players, is Edge Hill United.  Lead by player-coach Crios O'Hare and assistant player-coach Josh Taylor, Edge Hill's road to the Round of 32 started back in June.

Wins against Southside Comets FC, Stratford Dolphins, Brothers Townsville and MacKay & Whitsundays Magpies Crusaders United resulted in the Far North Queensland club becoming the only amateur side to make it to the Final Rounds of the FFA Cup.

The Cairns based team was hoping for another 'Cupset' in the Round of 32.  Sadly their road ended in a 2-0 defeat to the NPL side Gold Coast Knights.  That isn't to say that they didn't put up a fight.

Despite facing a dominant NPL team, Edge Hill United were able to keep the score at 0-0 for the majority of the game.  With just 21% of the possession and facing a number of attacks on their goal by the Knights, the northern Queensland team held in for 85 minutes.

Playing in front of 1,946 spectators at Barlow Park, the opening goal of the game came courtesy of Jheison Macuace.  After a bad attempt by Edge Hill at clearing the ball from their box resulted in a penalty, Macuace converted the spot kick to put the Knights ahead.

Edge Hill did not give up and tried to mount several comebacks.  Within a minute of the goal an attempted equalizer by their assistant player-coach Taylor went just wide of the post.

However deep in extra time, when Edge Hill's keeper sent in a deep pass into the opposition's eighteen-yard box, a quick one-man counter attack by the Knight's Dauntae Mariner was the nail in the coffin.

The spectacular goal came just a minute after his substitution into the game. Mariner picked up the ball off a rebound just outside his own eighteen-yard box.  The attacker then ran nearly the entire pitch before scoring the Knights' second of the evening.

With this win by Gold Coast Knights they have joined fellow Queensland club the A-League's Brisbane Roar as the second qualified team for the FFA Cup's Round of 16.

At present three other games are scheduled for the Round of 32, with two on the books to be held next week and one for the week after.  The remainder are postponed until present COVID-19 protocols and restrictions are changed.

With only NPL and A-League teams remaining in the competition at present, dreamers will have to wait until next year's competition to see who will be bestowed cup magic, and make it further than most thought possible, like Edge Hill United did this year. 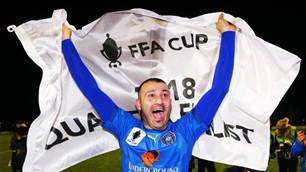