Australian coach David Magrone has described his 10-day stay at Greek Super League 2 side Trikala FC as “like stepping into the wild wild west” after abruptly exiting Europe’s most tempestuous football territory.

A member of Tottenham’s technical team under Tim Sherwood before becoming chief scout at QPR, Magrone brimmed with optimism at taking on the task of refashioning the middle ranking club from north western Greece.

But, despondent and disillusioned, he walked out last week before a ball had been kicked in the new season, claiming he had little say in the signing of players and was actively undermined by his technical director and assistants.

Among a raft of allegations over “unprofessional practices”, Magrone said there were allegations of Trikala officials accepting payments from outside sources to sign up certain players and delayed registering others until the last minute in case a better option came along, or the player got injured and became a liability.

“It’s the most amateurish and unprofessional environment I’ve ever stepped into,” said Magrone, who once headed up Spurs’ European scouting network.

“It was like the wild wild West and I don’t say that lightly.

“I was hired to build a squad composed of talented, ambitious players we could develop because that was my background at Spurs and QPR.

“But the moment I stepped through the door I could see the enormity of trying to change a culture which was anything but a merit-based system.

“Two of the three owners wanted me to make big changes to drive the club forward with players signed on their promise and potential. But the existing hierarchy and administration weren’t having any of that.

“It was just an impossible situation and I feel for those who shared my vision of trying to turn the club into a development hub. I was undermined from the word go - I know how a football club should operate and this wasn’t it.

“The issues were insurmountable and when you look at the scandals that have dogged Greek football over the years then perhaps it shouldn’t be so surprising.”

Interviewed for the Xanthi job by renegade Sydney businessman Bill Papas after Tony Popovic’s sacking in February, Magrone remains determined to jump back into the saddle elsewhere despite the sobering setback.

Now back in his UK base, he added: “I’m still interested under the right conditions and on the right environment.

“This experience hasn’t dampened by passion for coaching and I’ll looking out for the next opportunity when it comes along.

“You learn something from every situation and this experience has certainly showed me a side of football I knew existed but was hoping to steer clear of.” 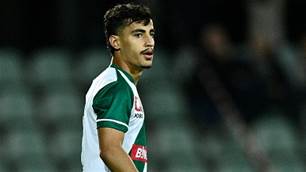