Bruno Fornaroli has come back to haunt Melbourne City, scoring the opener as Perth leap off the bottom of the A-League table with a 3-0 win at AAMI Park.

Bruno Fornaroli has been the hero against his former club, as Perth jump off the bottom of the A-League table with a 3-0 win over Melbourne City at AAMI Park.

Fornaroli headed home in the 27th minute, Harrison Delbridge scored an own-goal in the 47th and Tomislav Mrcela rounded out Friday night's victory with a fine header in the 71st, catapulting the Glory to sixth on the table - albeit with four games this round still to be played.

"I thought it was a great reward for them because they've been playing well without reward," Glory coach Tony Popovic said.

"We were here last week (against Melbourne Victory), we watched a good performance by us last week without a result and just shows that the players believe and today they were better than last week.

"We looked strong defensively, I thought we didn't really give any clear chances away to a very good attacking team and that completes the game."

City started the brighter of the two teams but, despite controlling possession, rarely made inroads in attack and lacked fluency.

Glory almost profited after a disastrous moment from Dean Bouzanis in the 17th minute, when the City goalkeeper attempted to play out from the back but turned it over to Diego Castro, who put his shot off target.

Against the run of play, it fell to Fornaroli to open the scoring in the 27th minute.

Juande had a strike ricochet aerially off Connor Metcalfe and Delbridge failed to deal with Fornaroli, who outbodied the defender and powered a header past Bouzanis.

The former City captain had a muted celebration but was mobbed by his teammates.

Perth doubled their lead in the 47th minute through a Delbridge own-goal.

Neil Kilkenny found Castro, who cut the ball back to Gregory Wuthrich with the defender launching a low, long-range shot.

In attempting to block the ball, Delbridge cut it into his own net.

In the 71st minute, Tomislav Mrcela, on his return from injury, made it 3-0.

Kilkenny played a 1-2 with Fornaroli and whipped a ball to the back post, from where Mrcela towered over Delbridge and buried a superb header.

Metcalfe had a potential consolation goal ruled out for offside in the 79th minute.

Fornaroli departed the game in the 87th minute, leaving to applause from City and Glory fans alike, with his former club suffering their first goalless performance since round one's Melbourne derby and Erick Mombarts left to lament their failure to break down Perth's defence.

"They were organised in a defensive block, a 5-2-3. This scenario is not good because, if we conceded one first goal like that, after they had to drop and to wait to be very compact," he said.

"So in the first half, it was difficult to break but we had time to correct.

"At halftime, we wanted to correct something but, as we started, we conceded a second goal, so after it was difficult." 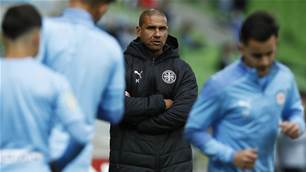 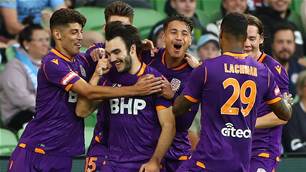 'They deserved that...' - Garcia lauds Perth win amid lockdown shock