Wellington Phoenix will be based in Wollongong for the rest of the A-League season but hope to play two home games in New Zealand when the travel bubble opens.

Wellington Phoenix hope the opening of the Australia-New Zealand travel bubble will allow the A-League club to return home for up to two games this season.

On Tuesday, the New Zealand Government announced quarantine-free, trans-Tasman travel will be allowed from April 19, opening the door for Phoenix to play at home for the first time since March 15, 2020.

Phoenix are currently based in Wollongong and will remain in NSW for the rest of the season but hope their final two unscheduled "home" games - against Perth and Western United - can be held in New Zealand.

"We're very hopeful - I think the news today was the best we could have expected. The mid-April border-opening gives us a chance to get things together," club general manager David Dome said.

"We're looking at sometime in May that we can come back and play some games in those last four rounds.

"That gives us a good six weeks now to pull the games together, do the ticketing, get the bookings in place, (book) accommodation, flights, get the games on sale, get the marketing underway.

"The timing's pretty good and ideally the more time you can have the better.

"But we're very confident that all things being equal and we can get some plans in place to have the games in New Zealand, we'll be back in New Zealand to play some games."

The Phoenix are yet to decide whether they would both be in Wellington or split between the capital and Auckland's Eden Park.

Dome hinted the latter option was attractive due to the financial benefits playing at Eden Park offered.

"Auckland and Wellington does make sense in terms of a split in games because it gives us the best chance to close some of the revenue gaps and expenditure holes that have occurred because of the relocation," he said.

Phoenix stressed no "definitive decision" had been made by the club or A-League as yet, given the risks posed by travel and potential future COVID-19 outbreaks in either Australia or New Zealand. 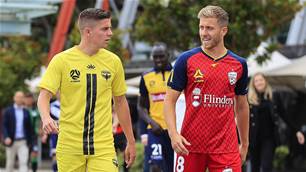