Last week, the 23-year-old Canberra-born defender officially left his Belgian club SV Zulte-Waragem with a year remaining on his contract.

The Belgian side wanted Timotheou to stay, but with his partner due to give birth and with COVID, he felt the wisest move was to stay in Australia and pursue his A-League plans.

Given the current A-League situation with squads and contracts, an Australian former Schalke and Belgian league player will surely be snapped up for next season.

And this, Timotheou says, can be the platform he needs to get his Olympics dream back on track with the national U23 team for Tokyo 2021.

“I met with the Socceroos assistant coach Rene René Meulensteen after my debut in Belgium,” Timotheou told FTBL.

“We had a coffee and discussed plans to be one of the leaders in the Olyroos.

“And then potentially him and Arnie [Olyroos and senior national coach Graham Arnold] were looking at me for potentially the Socceroos.”

The Olyroos sensationally qualified for Tokyo 2021 with one of the great national team campaigns culminating earlier this year.

For the first time in 12 years, the Olyroos qualified for an Olympics in Tokyo 2021 after winning the third-place play-off at the AFC U-23 Championships in Bangkok.

With a mix of A-League and overseas talent, Nick D’Agostino was the hero with a superb tournament and the decisive goal against the Uzbeks which sealed Australia’s spot at Tokyo 2021.

WATCH The Olyroos qualify for Tokyo 2021

Timotheou was involved in an Olyroos camp in Qatar last year as Olympics qualifiers loomed.

And, crucially, the powerhouse defender has been working with two of Australia's best fitness coaches in recent times.

Socceroos and Olyroos' high-performance coach Andrew Clark is one.

The other is former A-League championship winner and Sydney FC teammate Pedj Bojic, who specializes in one-on-one football-specific training with clients such as Socceroo and Premier League star Maty Ryan. 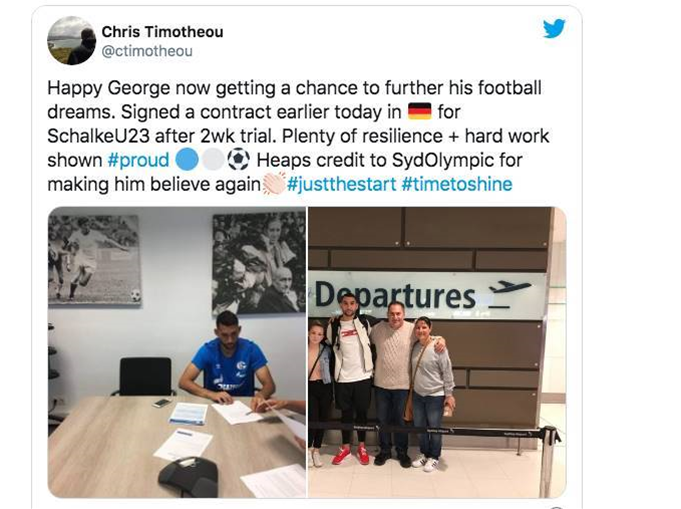 Timotheou signing for Schalke from an NPL club was huge news. Now he's aiming for Tokyo 2021

“He’s a dedicated young footballer so it’s been good to reunite with him.

“George has been nothing but a pleasure to work with.”

Timotheou has made his Bundesliga debut for Schalke 04 in 2019, less than two years after he was deemed surplus to requirements at A-League club Sydney FC. 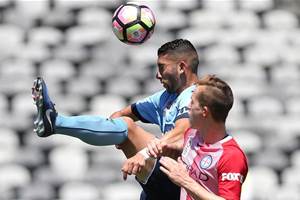 Canberra export George Timotheou has made his Bundesliga debut for Schalke 04 less than two years after he was shown the door at Sydney FC.

The next A-League season is due to kick off in early 2021.

And with Canberra building a powerful case for inclusion and edging closer to a spot in the A-League in the next couple of years, Timotheou is adamant he wants a spot as a foundation player at his hometown club.

"It’s incredible that the national capital of Australia doesn’t have a team in the A-League," Timotheou added.

“It would be a dream come true for me and Canberra.

“But for now, it’s about finding an A-League club, getting game time, and finding consistency so I can put my hand up and say to Arnie, 'I’m ready to go'.”