Western Sydney Wanderers boss Tony Popovic has refused to be drawn on the impact Nikolai Topor-Stanley's exit to big-spending UAE outfit Hatta Club will have on the side.

Hatta confirmed on Thursday evening (AEDT) that Wanderers' 31-year-old captain and foundation member had joined the club on a one-year deal.

The newly promoted side signed a number of foreigners in the off-season, but has suffered three straight 4-0 defeats and was desperate to bolster its defensive ranks.

Topor-Stanley was suspended for Wanderers’ round one 4-0 Sydney Derby thrashing after being sent off in their 4-1 FFA Cup semi-final defeat to Melbourne City.

Wanderers also lost Spanish defender Alberto Aguilar in the off-season, along with left-back Scott Jamieson who moved to Sweden.

The situation has left Popovic searching for solutions but he wouldn’t be drawn on the impact of Topor-Stanley’s looming exit.

“We can’t go into that now," Popovic said.

"We’ve built a squad where we feel anyone can play."

Brendan Hamill and Aritz Borda started in Topor-Stanley’s absence against Sydney FC, while Jonathan Aspropotamitis is expected to be called upon for Friday’s grand final re-match in place of the Spaniard after his derby red card.

“Aritz is not available,” he added. “(The back four) will take time to gel.

“Three of the back four were different from last year. We had a new back four at the start of last season, which took time to gel.

“This one will take time as well, but they’re good footballers so we know fluency will build and they’ll be fine.”

Popovic added that Wanderers were never going to stand in Topor-Stanley’s way, despite having another season remaining on his contract.

“Nikolai, with the history we have at this club, he’s been here four years and been an absolute fantastic servant, it’s an opportunity he wants to have a look at and we want to support him on that," Popovic said. 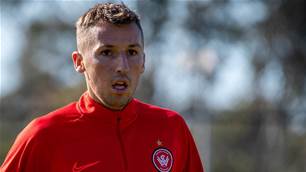