Western United coach John Aloisi is only too happy to back the experience of veteran Nikolai Topor-Stanley to replace Tomoki Imai for Saturday's A-League Men clash with Melbourne City.

Aloisi confirmed on Friday Topor-Stanley will start in his 350th ALM appearance with Imai suspended due to his red card in last weekend's 2-1 loss to Wellington Phoenix.

Western's first match in Victoria in 43 days was already going to be a special one for the 36-year-old Topor-Stanley, who'll become just the second player in the league's history to reach the 350 appearance mark behind record-holder Andrew Durante (358).

"He will slot in to the centre of defence and look, Nikolai's been great whenever we've called upon him. He's played well," Aloisi said.

"He's got so much experience, obviously with 350 (appearances).

"Isn't it much better playing your 350th from the start and then coming in as a sub?

"It's good for him. I'm sure he's excited about it but with all his experience I'm sure he won't be too over-excited.

"He'll be ready and focusing on performing well and maybe celebrating with the kids on the pitch after the game."

Western are aiming to claim a third-straight win over City, having defeated them 1-0 in December.

Scott Jamieson and Nuno Reis will be available for City following suspensions while new signing Carl Jenkinson has an extra week of training under his belt after his goal-scoring debut from the bench in last weekend's 3-1 win over Central Coast.

"Every time you play City it's going to be tough, no matter who's there," Aloisi said.

"We saw that last year in the grand final. They were missing their national team players and they still were able to win and win it well.

"Anytime we play City we know we're going to be in for a game, we know that it's going to be tough, but we believe if we play at our best that we can get the result we want."

One player who will be eager to impress is Andrew Nabbout, the winger bouncing back from being overlooked by the Socceroos with a goal in the win over the Mariners.

"Everyone goes through times like this," City coach Patrick Kisnorbo said.

"He's speaking on the pitch and he's been performing really well. 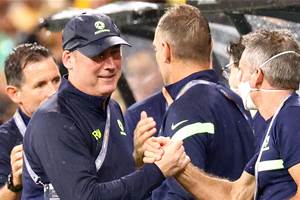 Socceroos coach Graham Arnold will return to the touchline for next week's World Cup qualifier against Oman, having tested negative for COVID-19. 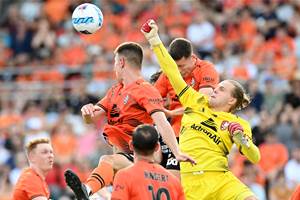 Bottom of the ALM ladder, beset by injuries and COVID-19 positives, Brisbane Roar coach Warren Moon is facing his toughest challenge as an ALM coach.