Newcastle defender Nikolai Topor-Stanley insists the Jets have moved on from last season's grand final and the club can do one better this campaign.

The Jets enjoyed a fantastic 2017/18 season, finishing second and reaching the grand final.

They hosted the decider but went down 1-0 controversially to Melbourne Victory.

Topor-Stanley, who has now lost four grand finals, said his side have accepted it and are ready for the new season.

"I guess it’s our sporting culture and doesn’t really reward results over the season, as opposed to one game," he said.

"But we’ve accepted it for what it is, and we’ve moved on. We’ve just got to put ourselves in a position to first make finals, and anything can happen from there.

"Of course it was disappointing, but if anyone was going to argue that was a poor year, that’d be pretty harsh. We had a home grand final. Unfortunately it came down to one game, one goal.

The veteran centre back is confident the Jets will be contenders again in 2018/19.

"I’m sure this time last year teams were looking at the Jets as an easy fixture and points in the bag but I daresay they’ll know we're a big challenge now," Topor-Stanley said.

"But not much has changed since this time last year. We’ve got experienced campaigners and a coach who is used to success so we built on that last year and we continue to have that mentality.

"We aim to be winners, whether that turns out is not a given. You can only control your own mentality, performances need to follow and then results should follow.

"It took a whole lot of effort and sacrifice and learning to ourselves in that [grand final], we had a great run and scored a record number of goals for the club.

"We've changed a few personnel but it doesn't mean we can't go that one step further this season, we have created a mentality that we’re a winning club but it's always hard to back it up.

"We’re a pretty close-knit group here and it's a good team culture, probably one of the best I’ve been in.

"We’re all working towards driving the same principals week in week out and hopefully that can show in our results." 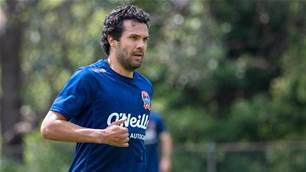 NTS: You can't give up