Defender Assou-Ekotto, 29, is excited by the chance to work with Redknapp again and was not concerned with the prospect of dropping down from the Premier League.

"It is fantastic to be linking up with Harry again," the left-back told the club's official website.

"I enjoyed my best form at Spurs under him and am looking forward to doing my best for QPR.

"I know the way Harry likes his sides to play, and it is a style that suits me, which is why I am excited about this opportunity.

"QPR have made a great start and I can't wait to help them build on that during my time here."

On Assou-Ekotto, who joined Tottenham from Lens in 2006, Redknapp said: "Benoit, for me, is one of the best left-backs in the Premier League, so I'm delighted we've been able to bring him here.

"I really think he's top class. He played for me every week at Tottenham and never let me down once.

"He's a great lad and will add great quality to the squad."

He added: "He's a player I fully expect to go to the very top of the game – he's a future England international.

"I played him at Spurs in Europe and he was fantastic for me. He's got all the attributes to be a top, top player.

"He can pass, he can create, he can score goals – he's a fantastic player and I’m confident he'll flourish here for us." 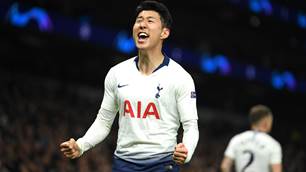