Adelaide recruit James Troisi is confident the benefits of last weekend's bye will outweigh any loss of momentum for the A-League club.

Riding high after their thumping FFA Cup final victory and a come-from-behind win over Newcastle, Adelaide could only kick their heels last weekend.

A bye denied the Reds the chance to continue their momentum, but has given them a much-needed refresh before returning to A-League action at home against Brisbane on Sunday.

Midfield recruit Troisi, who made his first start for Adelaide in the 2-1 win against the Jets, is confident the benefits of the break will outweigh the negatives.

"I guess we'll find out on Sunday but we've been training extremely hard," the ex-Socceroo said.

"Everyone seems pretty focused and switched on.

"Although you want to continue that momentum, the way things worked out and obviously with the cup game, I think it was a good time to have a little bit of a rest and get some of the boys some fresh legs."

Troisi was just a youngster making his way through the grades at Newcastle United when he last faced Fowler in a reserves game at Liverpool in 2006.

The star-struck Troisi nabbed Fowler's shirt following that match but won't be handing any gifts back at Coopers Stadium.

"Obviously he was a world class player (and) now he wants to ply his trade as a coach," Troisi said.

"Brisbane have changed a lot. They've had, I guess, not the best start to the season. But ultimately they're always a dangerous side.

"They work hard, have got some good players ... in general we want to take every team as if it's the best team in the league.

"If we go about our business and our mentality like that, it doesn't matter who you come up against." 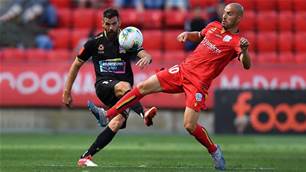