The Matildas haven't played a match in more than a year, but that drought will end when they take on world No.2 Germany on enemy territory.

Soccer superstar Sam Kerr says the Matildas will embrace their underdog status when they take on powerhouses Germany and the Netherlands over the next week.

The Matildas have assembled in the Netherlands under new coach Tony Gustavsson to prepare for their first games in more than a year.

Australia will take on world No.2 Germany in Wiesbaden on Saturday, before taking on 2019 World Cup finalists the Netherlands in Nijmegen the following Wednesday.

The two matches will be a crucial part of the Matildas' preparations for the Tokyo Olympics, which begin in July.

The Matildas are ranked seventh in the world, and their last match was in March, 2020 when they beat Vietnam 2-1 in an Olympic qualifier.

Kerr knows the odds will be stacked against Australia in the friendlies, and it's a situation she's embracing.

"All those teams have been playing multiple games ... and they've got some of the best players in the world," Kerr said.

"That's what we want - we want to see where we're at, it's a good benchmark for us.

"There's a lot of new faces (in our camp), so it is going to be a challenge, but Aussies love that underdog mentality, so I'm sure we'll roll with it."

Kerr has had only one training session under Gustavsson, but the early impressions have been good.

"So I think he's going to fit in well with the team not only off the field, but definitely on the field - I think he has what we need."

Kerr enters the friendlies in the hottest of form after producing a series of stunning displays for her club team Chelsea.

The 27-year-old scored a hat-trick last week to lift Chelsea to a 6-0 victory over Birmingham City.

It took her tally of Women's Super League goals to a competition-high 17 for the season, equal with Arsenal's Vivianne Miedema.

As much as she's enjoying her time in England, Kerr has been waiting patiently to link with the Matildas.

"We all stayed in touch (during the 12 months apart), but it was just different not being able to meet up every month and get a bit of a break from your club team," she said.

"Sometimes those environments can be really intense, and coming into the Matildas feels like a real family feel. So it was tough, especially with everything gong on around the world, but it's great to be back now." 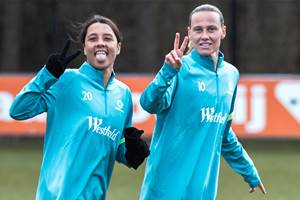 The OS-based Matildas are back in training again ahead of their friendly clashes with Germany and Netherlands - and were they happy to be back together in camps again after 12 long months!

Meanwhile, the Matildas have been dealt a double blow with right back Ellie Carpenter and Amy Harrison ruled out of the Germany and Netherlands internationals.

FFA CEO James Johnson confirmed both players had failed to clear COVID protocols from their respective bases in Lyon and Eindhoven.

"Football Australia's top priority is to protect the health, safety and wellbeing of our players and staff, and we have developed a stringent set of protocols to ensure this, whether they are based in Australia or internationally.

"Unfortunately, through no fault of their own, Ellie and Amy didn't clear the protocols prior to their scheduled travel to camp from their respective bases in Lyon and Eindhoven."

The OS-based Matildas are back in training again ahead of their friendly clashes with Germany and Netherlands - and were they happy to be back together in camps again after 12 long months!

'We've been spending days in training to see how we'll fill that position...' 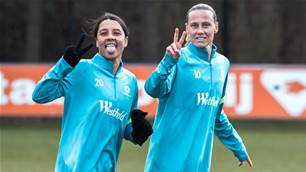