Qatar produced an emphatic 4-0 win to end the campaign of host nation United Arab Emirates in front of 38,646 in a packed Mohammed bin Zayed Stadium in Abu Dhabi to reach their first AFC Asian Cup Final where they will take on Japan on Saturday morning.

Sadly, UAE’s exit from a tournament in which they had probably gone further than many thought was marred by many ugly incidents from their followers that culminated in Qatar’s team having to be ushered off the field for their own protection.

An error by UAE’s goalkeeper Khalid Eisa allowed Boualem Khoukhi to put Qatar ahead (22’). A wonderful solo effort by Almoez Ali (37’) doubled their lead before half-time. Two more goals in the second half from their captain Hassan Al Haydos (80’) and substitute Hamid Ismail (93’) capped the impressive performance.

Both sides made three changes following their 1-0 quarter-final successes.

Qatar were able to welcome back Assim Madibo and 2018 AFC Player of the Year Abdelkarim Hassan following their suspensions while Kharim Boudiaf made his first start in the tournament. 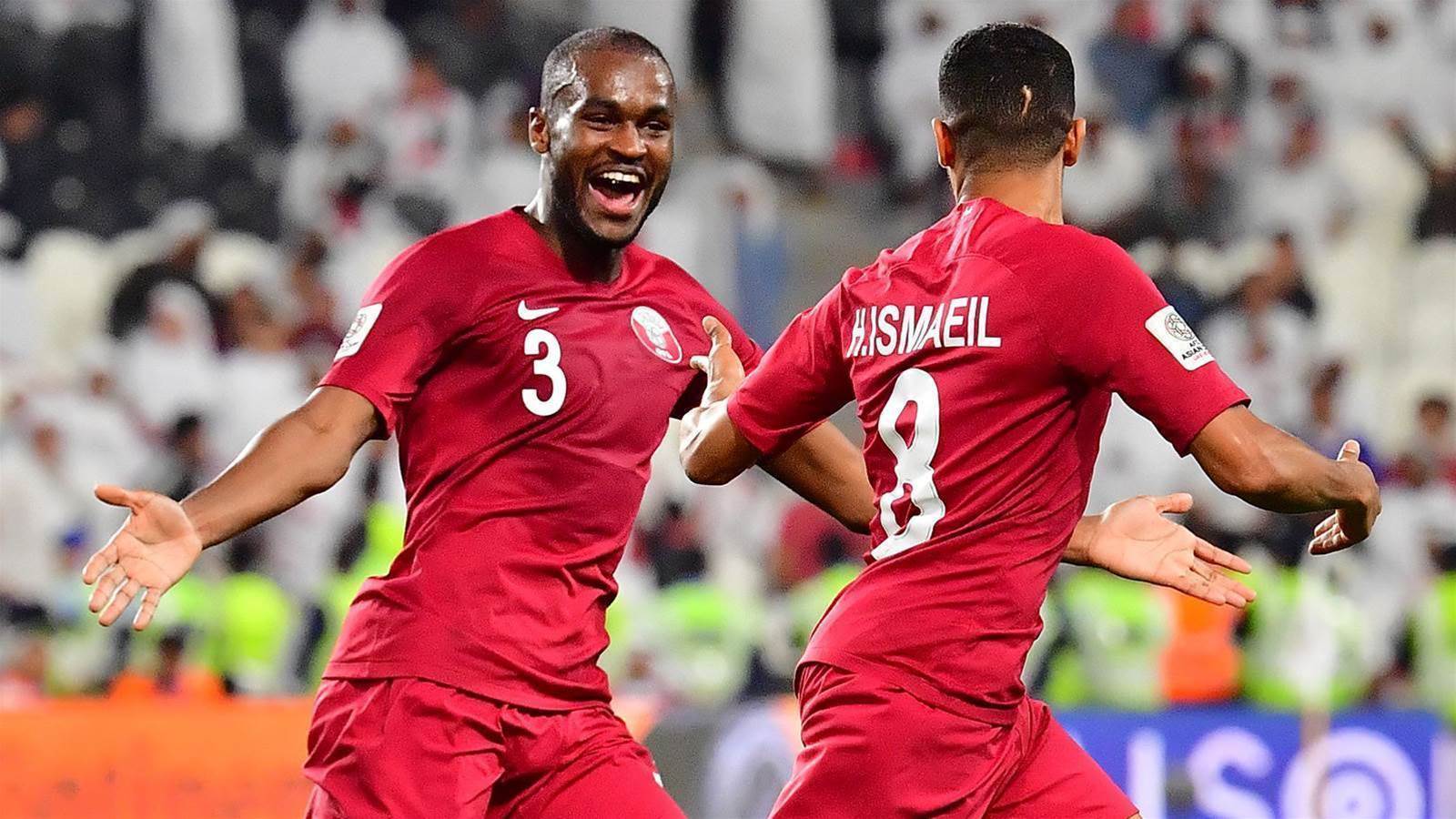 UAE’s Khamis Esmaeel was another returning to his team after two yellow cards earlier in the competition. Injuries allowed Amer Abdulrahman back into the starting line up and Saif Rashid who had only come off the bench in two previous games.

The Qataris sang their national anthem whole heartedly as many Emirati supporters chose not to stand with the majority of the crowd jeering throughout.

After the game got underway it took until the 12th minute before either team could produce an attempt on goal. Not for the first time, Qatar’s Hassan Al Haydos produced some neat work down the right and the ball found it’s way to Salem Al Hajri whose shot tested Khalid Eisa to his left.

The next effort on target produced the opening goal. UAE broke following a free kick by Qatar in a threatening position that came to nothing.

When Ismail Al Hammadi lost the ball Qatar produced a counter-attack with Khoukhi racing down the right.

The obvious choice was to play a cross to Almoez Ali who had found space in the middle. Instead Khoukhi tried his luck from an angle twenty-five metres out and the ball went under the hands of Eisa who was slow to get down.

UAE began to build up some pressure and when Walid Abbas crossed from the right Ismail Al Hammadi headed into the arms of Saad Al Sheeb for only the eighth shot on target that Qatar had conceded in the entire tournament,

With half an hour gone UAE won a corner on the left and when Esmaeel swung it in Ali Mabkhout glanced a header wide of the far post.

Eight minutes before half-time and Almoez Ali scored his eighth goal of the competition and it was a beauty. As the defence backed off he continued his run forward and unleashed a right footed effort that curled on to the right post and back into the net (2-0). 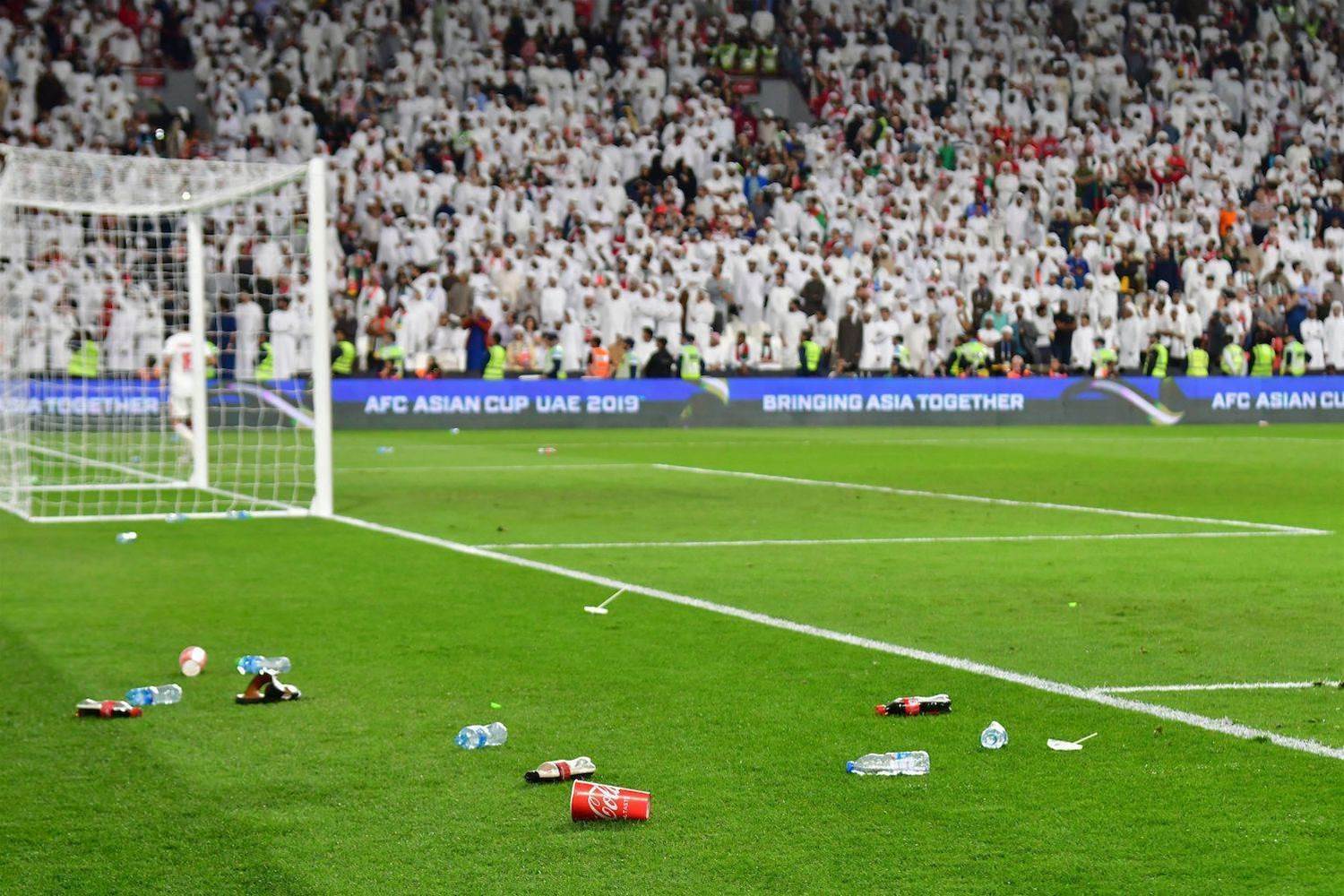 Unfortunately there were ugly scenes as Qatar celebrated. Akram Afif had already been pelted with bottles of water when he attempted to take a corner and now not only bottles but several shoes were also launched from the crowd, an extremely offensive gesture in this part of the world.

UAE knew that they had a huge task ahead of them with Qatar having not conceded a goal during the competition. An early goal in the second half would give them momentum in front of the raucous crowd so they went hard at Qatar’s defence and were almost rewarded in the 52nd minute when Al Mabkout’s shot from the edge of the area was deflected with Al Sheeb anxiously tipping the ball over the bar.

As the pressure on Qatar’s defence mounted Al Sheeb was tested again when Bandar Al Ahbabi floated a cross to the far post with substitute Ismail Matar looping his header back across the goal.

Qatar sealed their place in the final with ten minutes to go when Al Hados ran on to ball from Afif and coolly chipped his shot over Eisa as he came out (3-0).

This triggered the largest barrage of bottles to be launched at the Qataris with the referee having to pull the players away from the edge of pitch and some of the Emirati players moved in to try and calm the situation.

A stronger line of security personnel had been installed around the perimeter but they could do nothing about the missiles and offenders were seen to be allowed to return to their seats after a reprimand.

In the 91st minute foul play now occurred on the pitch with the Video Assistant Referee bringing an incident to the attention of Mexican referee Cesar Ramos who produced a red card when he confirmed that Ismail Ahmed had put an elbow into the face of Salem Al Hajri.

In time added on Qatar produced one more attack with Boudiaf, who had only been on the field for a minute, threading the ball through to Ismaeil whose shot had enough power to get past Eisa and roll into the back of the net.

As soon as the referee blew the final whistle most of the Qatari players and support staff ran straight down the tunnel to avoid any injuries from further projectiles.

Qatar will now face Japan in the final after they produced an equally impressive display when they defeated Iran 3-0 in the other semi-final and the performances by the two semi-final winners sets up a fascinating final for Friday night.