Adelaide United have mounted a brave comeback to draw 2-2 with Melbourne City, who blew a chance to claim outright second spot on the A-League table.

A 10-man Melbourne City have blown their chance to claim second spot in the A-League, drawing 2-2 with Adelaide after dropping a 2-0 lead at ANZ Stadium.

Adrian Luna opened the scoring in the 34th minute, with Jamie Maclaren snaring his 20th goal of the season in the 40th.

But after City's Craig Noone was sent off in the 67th minute, Adelaide's Kristian Opseth landed a 78th-minute penalty before Ben Halloran's 91st-minute strike earned the Reds a point.

"We totally controlled the game in the first half," City coach Erick Mombaerts said.

"That changed with the red card - mentally, that changed a lot for the opposition.

"So mentally, they think that if they score one goal they can come back - and it happened like that."

City would have secured second place with victory but are now just three points ahead of Wellington with a game to play.

In the 23rd minute, the goal post spared Jordan Elsey's blushes when the Adelaide centre-back almost sent a wild backpass into his own net.

Florin Berenguer cleverly released Noone, who whipped a left-footed cross towards a diving Luna to head home.

The game was turned on its head in the 67th minute when Noone went flying in on Michael Jakobsen and received a straight red card.

Ten minutes later, substitute Pacifique Niyongabire brilliantly won a penalty - cutting past Nathaniel Atkinson and then Luna, before the Uruguayan bodied him just inside the area.

Opseth calmly dispatched the spot-kick to give Adelaide hope.

In the first minute of injury time, Halloran left Scott Galloway in his wake and ripped a terrific strike past Glover to equalise.

"They had a couple of good counter-attacks and that's where they got their goals from - a little bit of luck their way," Adelaide interim coach Carl Veart said.

"But other than that I thought we were completely in charge for the 90 minutes.

After the match Veart confirmed to Fox Sports that he "most definitely" wanted the Adelaide United coaching role on a permanent basis. 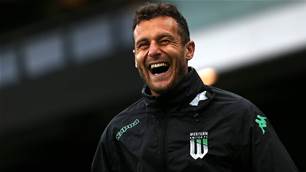 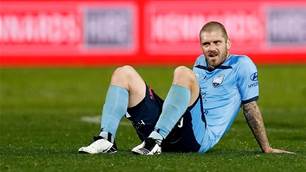 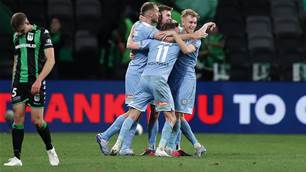