A 4-0 win by Uzbekistan over Turkmenistan may well see Australia play Japan in the Asian Cup round of 16 if the Socceroos get the point that they need against Syria to qualify.

Uzbekistan now lead Group F and a draw with Japan in their final game will see the Socceroos face the Blue Samurai. Should Japan win then Australia would face Uzbekistan in the first of the knockout rounds.

A crowd of 4,354 turned up at Rashid Stadium, Dubai to see a clash between the two neighbouring countries that produced an open, entertaining game.

Four first half goals secured the win. Javokhir Sidikov scored his first goal for his country to give Uzbekistan the lead (17’) and they had a second when Eldor Shomurodov struck a lovely right foot shot off the far post (24’). Jaloliddin Masharipov was gifted an opportunity to make it three (40’) and two minutes later he laid on the pass for Shomurodov to coolly score his second of the half (42’)

Uzbekistan were looking for a win by two or more goals to ensure that they would lead Group F before their final match against second placed Japan.

While Turkmenistan fielded the same team that went down 2-3 to Japan in their opening fixture Uzbekistan made three changes. One was enforced with defender Egor Krimets suspended following a red card in the 2-1 win over Oman.

There was controversy within a minute of the match getting underway. When Ruslan Mingazov attacked down the right he was brought down from behind by Oleg Zoteev. Emirati referee Ammar Ali Aljneibi gave a free kick outside the penalty area but the main contact that caused Mingazov to fall was clearly inside the box.

Not for the first time in the tournament the Video Assistant Referee (VAR) may have produced a different outcome but it isn’t being introduced until the quarter-final stage.

Having come close in the opening stages, Uzbekistan took the lead in the 16th minute. Otabek Shukurov won the ball in midfield and threaded it through to his captain Odil Ahmedov. He moved the ball on to Khamdamov who pulled the ball back from the byline to the far post where Sidikov had a simple tap in (0-1).

They doubled their lead in the 24tth minute thanks, again, to some good work by Shukurov. He threaded a ball directly in the path of Shomurodov who, despite being challenged by two defenders, struck the ball accurately in off the far post (0-2).

Two further goals in as many minutes gave the White Wolves a four goal lead by the break to all but ensure the win.

Masharipov was gifted an opportunity and space on the edge of the penalty area when defender Gurbangeldi Batyrov headed the ball straight to him and he made no mistake to stretch Uzbekistan’s lead (0-3).

Shomurodov got his second when he played a wonderful one-two with Masharipov the provider. Under pressure, he took his time before finding the space to shoot past Mammet Orazmuhammedov who’d had no chance with any of the goals (0-4).

As the Emerald’s defence lost all structure there have been a fifth but Khamdamov blasted a straight forward chance against the foot of the post.

Ten minutes into the second half and Shomurodov could have had his hat-trick. Provided once more by Masharipov he was unable to beat Orazmuhammedov in a one-on-one with the goalkeeper.

Understandingly, Uzbekistan lacked the urgency to seek more goals although Shukurov came close when he curled a shot onto the post. In the 59th minute Turkmenistan had their best effort when substitute Altymyrat Annadurdyyev struck a free kick over the wall but narrowly wide of the left upright.

Australia is far from certain to make it through the group stages but, if they do, they are likely to face another Asian heavyweight either Japan or Uzbekistan. 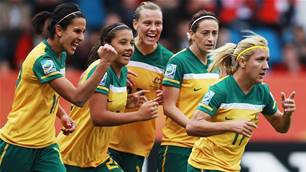 'The Matildas will never lose their 'Never Say Die' mentality'