Adelaide United coach Carl Veart has revealed a change in the club's defensive footprint has paid dividends with a four-game unbeaten run.

Veart took over at the Reds as interim boss in June after Gertjan Verbeek's departure.

Under him Adelaide has not lost a game and registered two victories and two draws since the restart of the A-League season.

On Thursday they held defending champions Sydney FC to a 1-1 draw.

"Overall I'm happy with the performance from our side," Veart told FTBL.

"I think we played some really good stuff at times and we played against the best team in the league at the moment. So we're very happy with the performance in the end. We restricted Sydney to mostly transition attacks.

"I'm enjoying it [the job] very much so. When the club gave it to me I said at the time I took it knowing it would not be full-time. The players have showed they're enjoying the football I'm asking them to play as well."

Veart said the main difference he has implemented since taking over at Hindmarsh Stadium has been the way the team defends.

"The main thing is I've changed the way we play defensively," the former Socceroo said.

"Attacking-wise it's still very similar, but defensively we've changed our set-up and our structures. And I suppose I've come at it with a different way to the way we train."

The Reds currently sit in sixth spot on the ladder but need to beat Melbourne City on Tuesday to ensure they make the finals.

"They're a very strong side," the 50-year-old admitted.

"They've got a lot of depth in their team and they've got some really good players. Jamie Maclaren's the leading goal-scorer in the league. When you've someone like that who's scoring a goal a game pretty much it's easier to get wins.

"If we win against City on Tuesday it would go a long way to making sure we make the finals, and that's the aim. Tuesday night we need to win to give ourselves the best possible chance." 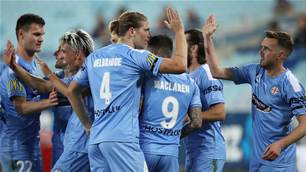