A late goal has secured Adelaide United a "lucky" 2-1 A-League win over Newcastle in stifling heat at Coopers Stadium.

After the temperature had hit 38 degrees on Sunday afternoon before kickoff, James Troisi - with seven minutes remaining - scored his first A-League goal for the Reds to break a 1-1 deadlock.

However, United coach Gertjan Verbeek was disappointed, admitting his side "stole" the win.

"If you look at the way we played football, I was not amused - it was no good," he said.

"We were the lucky team - it was a stolen win. They got a lot of chances, so that kept us alive.

"The second half, they scored to draw, then we were lucky again that they didn't get in - we have to thank (goalkeeper) Paul Izzo."

The Jets threatened after three minutes when Ben Kantarovski's header forced a superb reflex save from Izzo after a perfect free kick from Dimi Petratos.

Soon after the first of two drinks breaks on the quarter-hour, Angus Thurgate rattled the Reds' post from a tight angle.

The Jets continued to pepper Adelaide with half chances and should've broken the deadlock just before the half-hour.

Steven Ugarkovic drove through, slamming his shot onto the crossbar with the rebound falling for Petratos, whose shot was blocked by some desperate Adelaide defending.

Thurgate shot from five metres but Izzo managed to get down low to miraculously keep the shot out.

Newcastle's misses were costly as Adelaide took the lead a minute later via George Blackwood.

Young gun Al Hassan Toure beat his defender on the edge of the area and supplied the ideal cut-back for Blackwood to tap in.

The Jets had claims for a penalty close to halftime when Thurgate broke through Adelaide's defence and looked to have been brought down by Izzo, but it was given the all clear.

Newcastle eventually scored two minutes into the second half via a powerful header from Matt Millar after a Petratos corner.

Adelaide struggled to contain the visitors and had their keeper to thank for keeping the scores level.

Izzo parried away a thundering drive from Millar on 53 minutes before another stunning reflex save kept out Nick Fitzgerald who latched onto a Jason Hoffman cross after a quick counter.

On 83 minutes, Adelaide made the visitors pay a second time. Troisi stole through Newcastle's penalty area and slipped one past an onrushing Glen Moss.

Jets coach Ernie Merrick was left wondering how his team would return to Newcastle empty handed after a dominating performance.

"We're doing a lot of things right but I have to say the boys are absolutely shattered," he said.

"I thought they played really well, away from home. It's not easy to come here and play and ... we've got nothing to show for it.

"To be perfectly honest, we just need a goalscorer, a finisher, during open play," he said. 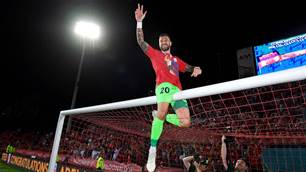 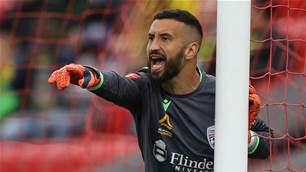 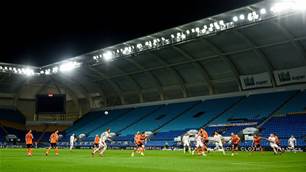