Dino Djublic might be 36 and uncontracted for next season but says he won't be retiring if Perth Glory win the A-League grand final on Sunday.

Glory take on Sydney FC in the competition decider at Optus Stadium.

The club has never won the A-League's top prize, and a grand final trophy would be a fitting end to the veteran's action-packed career.

But the defender is not ready to call time on his playing days that started all the way back with Perth Soccer Club in 2001.

"People ask me when do you think it's time but my body feels good, I feel OK and as soon as I feel the body is not feeling good, I'll be the first one to put my hand up and say look it's time.

"But at the moment it feels good, I'm playing well so I just want to continue that and hopefully after the final I'll sit down with the club and see if it suits us both (for another year)and where we're all standing.

Djublic has made 19 appearances this season and has helped Glory create an ironclad defence.

The centre back, who turns 37 next February, has made the tenth most appearances for the Glory.

He believes having the A-League grand final in Western Australia for the first time is special for both the club and the state.

"It's going to be massive - not just for us players but also for the club and the Western Australian people," Djublic said.

"Now you walk down the street and everyone's wishing you good luck, people you've never seen or never heard of. It's big. I think the whole community of Western Australia is coming together."

Sydney FC finished second on the ladder this season and the defender is expecting a tough encounter,

"Sydney FC are a good team," he said.

"They've been on tthe op for the past few years. We know it's not going to be an easy game, and you wouldn't expect it to be an easy game in the final. But I think as long as we stay focused tactically and not switch off, we should be OK." 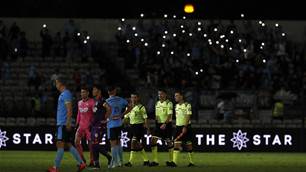