Interim Perth Glory coach Ruben Zadkovich is running out of room on his office whiteboard to keep track of the struggling A-League Men's club's injury toll.

Ahead of a visit from former Glory coach Tony Popovic's Melbourne Victory on Wednesday, Zadkovich says he's got between 12 and 13 first-teamers unavailable for the game.

With Perth now winless in 10 games after their 4-2 loss to Macarthur last Sunday, Zadkovich has had to turn to the club's youth ranks as a hectic fixture list continues to take its toll.

"We have to take player welfare into consideration. The fixture list is almost beyond a joke in reality," Zadkovich said.

"The best way to manage that is to make sure we don't send anybody out there that's not fit to play.

"We'll keep having a tinker with the squad and changes and there are some other quality young players at this club that will put their hand up."

While Zadkovich is trying to piece together an XI for Wednesday's match, Victory are firmly in the hunt for a finals position.

Popovic's team sits fourth on the ladder, having played two less games than third-placed Macarthur but only a point behind the Bulls.

With Socceroos pair Nick D'Agostino and Ben Folami pushing to start for Victory after coming off the bench in last weekend's 1-0 win over Adelaide, Zadkovich is all too aware of the task that awaits his inexperienced team.

"One of the biggest clubs in Australia with a coach who knows exactly what he wants," Zadkovich said.

"He's gone and signed players that play the way he wants to play so again they're going to be well-structured, well-disciplined.

"They're hard-working, they're fit and they have high-quality players in key areas.

"Unfortunately for us right now our high-quality, better players in the squad aren't available."

Victory also have the motivation of revenge having suffered a 3-0 loss at home the last time these teams met in December, a defeat Folami said was significant in Victory's season.

"It was a time where the boss really wanted us to make sure that we react to any adversities in any games and I think since that point we've definitely gotten better at that," the striker said.

"It was a good lesson for us as a group of players and it's a lesson that we've taken on board really well." 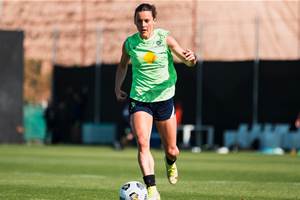 Fighting Matildas will bounce back: Raso

Hayley Raso is backing the Matildas' fighting spirit to show as they look to rebound from their Asian Cup disappointment when they take on New Zealand.