Melbourne Victory bolstered their midfield with the signing of Albanian international Migjen Basha on a two-year deal as the club's final visa signing.

Basha, 32, has 33 caps for his country and joins the club after spending last season with Greek outfit, Aris Thessaloniki.

Coach Marco Kurz said he was delighted to welcome another experienced player in Basha as his squad nears completion.

"I'm very pleased to add another international with such experience to our squad," Kurz said.

"Given he has played at the highest level domestically I believe he will be a strong leader amongst the group.

"With midfielders Jakob (Poulsen) and Kristijan (Dobras) having also arrived, we're really pleased with the talent we've managed to add ahead of round one."

Born in Switzerland, Basha started his professional career with hometown club Lausanne before moving to Italian side Lucchese during 2005-06.

After a spell with Viareggio, he played for Rimini, Frosinone and Atalanta, making 23 appearances as the latter won Serie B in 2010-11.

Sent on loan to Torino, Basha helped them earn promotion from Serie B the following season, later making that switch permanent.

He spent four seasons at the club before returning to Switzerland with Luzern, only to make the move back to Italy with stints at Como and Bari prior to joining Aris ahead of the 2018-19 season.

Basha most recently played for Albania during Euro 2020 qualifying in June, having made his international debut in 2013.

He will join the squad next week and begin training pending a medical clearance. 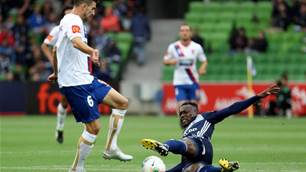