Melbourne Victory chairman Anthony di Pietro says their season ended as badly as Game of Thrones...and it's time for change – which may see the exit of club icon Kevin Muscat.

Victory today closed ranks around their coach, refusing to address their coach's future at their end of season function.

Over 1200 club supporters gathered in Melbourne on Friday for what they'd hoped would be a rousing send-off before another Grand Final appearance.

Instead, the function room was practically funereal after Victory's 6-1 semi-final defeat to Sydney FC last week; the heavyweight club's worst ever loss.

"Our chapter this season has been written ... and just like Game of Thrones it ended badly. Very, very badly," he said.

"Unfortunately, all the exceptional things that happened (this season), none which happened by accident, no one is going to remember.

"What will be remembered is the abomination that was that 6-1 scoreline."

Since Sunday night's mauling, rumours have circled as to the future of coach and favourite son Muscat. 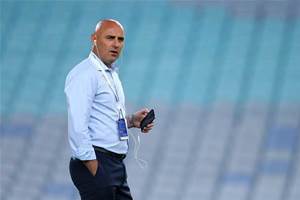 Muscat is contracted for next year but is an ambitious coach with little left to prove in Australian football.

Di Pietro did nothing to quash those murmurings at the Victory in Business function, saying in a prepared address that change was coming.

"Like every season, there are going to be changes to our personnel," he said. "One thing that's going to remain constant are the expectations that we place on ourselves.

"We will use moments like last Sunday's defeat to become stronger. We come back bigger better and more potent than ever in season 15."

It's unclear as to whether Di Pietro was making reference to player turnover - which will include captain Carl Valeri, marquee Keisuke Honda and potentially many more - or his head coach.

He was Victory's foundation captain, transitioned straight into the coaching team and took over from Ange Postecoglou when he departed in 2013.

In brief remarks to the same function on Friday, Muscat alluded to planning already being underway for next season but didn't say whether he'd be around when the next campaign begins in October.

"The wound is obviously still open," Muscat said. "Sifting through what was, let's be honest, a disastrous night is going to take some time.

"What's most important is what we do next."