ABC2's coverage of the much-hyped match between Liverpool and Sydney FC has been slammed as embarrassing, disrespectful and cringeworthy by fans and pundits.

Despite jetting in just hours beforehand, the EPL giants swatted aside the Sky Blues 3-0 in what was a dour exhibition game in front of 72,892 fans at ANZ Stadium.

But the most savage criticism was saved for what took place off the pitch with Fox Sports pundit Robbie Slater letting loose on social media with a series of fiery tweets.

The former Socceroo tweeted: “How can we work so hard for 12 years and allow this to happen in front of a world audience !

“I love our game and to have it bagged and disrespected by this coverage is unacceptable.”

Who thought this was a good idea at FFA!This is is unforgivable and I and every supporter of our game would like an answer ! #LIVSYD

Football Federation Australia conceded that the viewing dished up by the national broadcaster was below par.

On Thursday morning FFA tweeted: “Like many fans, FFA is disappointed with some aspects of the ABC’s broadcast of the Sydney FC v Liverpool FC match last night.

Jules Schiller, Tegan Higginbotham and Steen Raskopoulos were accused of amateurism in their odd and rambling lead-up to the match while Aaron Chen’s interactions with Liverpool and Sydney fans left viewers slack-jawed.

tuned in to #LIVSYD and this was the first thing I saw. what an utter, complete disaster this @abc2 coverage is. switched straight off. pic.twitter.com/mX8NZNjXsM

Slater unsurprisingly gave a plug for Fox Sports, which has covered the A-League from the beginning, but for the most part he was preaching to the choir with his bruising analysis.

“I am so angry that they would do this to the game ! Whoever at FFA made this decision in my opinion should hang their head in shame #livsyd,” Slater tweeted.

Again: “This is what happens when people who have none or little knowledge of football make decisions ! Embarrassing #LIVSYD.”

And that was only the half of it. Schiller took the Twitter showing he was well aware of the social media storm as fans and viewers vented their anger and embarrassment - one questioning whether this was "the worst football coverage in the history of Australia?"

Learnt that to be centre of a Twitter Hate storm it's a worse crime to do badly reviewed sports coverage than propose blowing up ABC staff.

@ABC2 I want my taxes back for #LIVSYD coverage. I'm serious!

Is this the worst football coverage in the history of Australia? #ABC #ABC2 #livsyd #LFC #SydneyIsSkyBlue 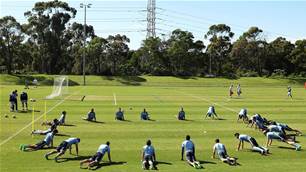 Sydney FC to complete 'Centre of Excellence' in 2021