Socceroos keeper Danny Vukovic was beaten three times in a surprise Europa League defeat while Tom Rogic was absent with a minor injury for Celtic overnight.

Vukovic was between the sticks as Genk went down 3-1 to Norwegian outfit Sarpsborg 08 away from home.

The Australian was first beaten by a clever Patrick Mortensen flick, before Genk levelled after half-time through Leandro Trossard.

In the 54th minute, Vukovic was unable to clear a corner, leading to Kristoffer Zachariassen firing home from close range and Mortensen added another with a bullet.

Elsewhere, Celtic lost 3-1 at Red Bull Salzburg with Rogic not travelling due to an undisclosed injury.

Celtic boss Brendan Rodgers said: “Tom Rogic hasn’t travelled so he’ll be unfit for the game but should be ready for the weekend.” 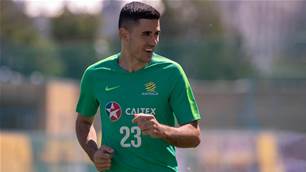