Once heralded as English football's next big thing, new Wanderers player Jack Rodwell has had a career overshadowed by limited playing time, a struggle to stay fit and injury. Despite this, the addition of the former Premier League player is a major coup for Western Sydney, especially when one considers that he is not signed as a marquee player but under the salary cap.

The full announcement by the Western Sydney Wanderers can be viewed using this link.

Rodwell started his professional career with Everton FC's youth academy and made his Premier League debut in 2008 against Sunderland.  He would go on to play in 167 matches in the English top flight with Everton, Manchester City, Sunderland and most recently Sheffield United.

The defensive midfielder, who can play as a defender, has also appeared 23 times in the English Championship.  He likewise featured in the UEFA Champions League and Europa League, and has made three appearances at the senior level for England.

Rodwell has not played much football in the last few years though. After he moved from Blackburn Rovers to Sheffield United during the 2019-20 season he only played 15 minutes in his two campaigns with the club, making one Premier League appearance in 2020.

While questions about his fitness are being raised, the 30-year old is still relatively young and should be in the prime of his career.  He has seemingly has done enough to impress his new head coach Carl Robinson.

Robinson watched the Englishman train for two weeks with Western Sydney prior to offering him a one-year Wanderers contract.  According to Robinson, Rodwell is a great fit for his team:

“We are delighted to have Jack part of our squad as he is a strong character with excellent leadership qualities,” said Robinson in the Western Sydney Wanderers' club statement.

“He’s settled in excellently in such a short time, and fitted in well with the group sharing the same values and ideas we have here as a club.

“His experience speaks for itself and his signing his an opportunity for him to get back to enjoying his football in a positive and competitive environment.

‘We look forward to Jack being a great addition to our strong core group of players this season.”

Rodwell echoed his new coach's feelings about returning to play in the club statement saying he has more to give to the game.  Moreover, speaking of the opportunity to play in the A-League the new Wanderer expressed his excitement.

The midfielder has a long personal history with Australia as he is married to an Australian.  Rodwell met his wife eleven years ago while on a pre-season tour with Everton FC.

“This move is really exciting for me, I’ve been looking at the opportunity to play in Australia for a couple of months and with my wife being from Western Sydney, the Wanderers was the perfect destination,” said Rodwell.

“Australia is like a second home to me, it’s my favourite country on earth, it’s where my wife and her family are from; we love the place.

“I honestly can’t wait to play. With the opening match being the Sydney Derby, everyone in my family will be there watching so it is a huge opportunity and something I am really looking forward to.

“I’d like to thank the club for this opportunity, and hope I can repay the faith they have shown in me.”

Western Sydney Wanderers have announced that this signing was their "final piece to the squad this season", signalling an ending to their 2021-22 pre-season additions.

Rodwell will be available for the Wanderer's Round 1 Sydney Derby, having been named to the team's extended squad.  New signings Rhys Williams, Dimi Petratos and Keijaro Ogawa are also listed. 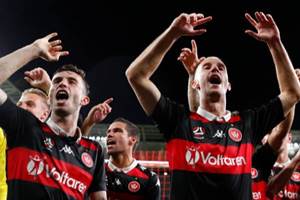 The Wanderers open their 2021-22 campaign on Saturday, November 20, 2021 against Sydney FC.  Their full schedule can be found using this link.