Western Sydney Wanderers fans have called for an easing of police presence at home games, with many believing the large numbers of police that turn up to BankWest Stadium is overkill.

Last weekend’s derby with bitter rivals Sydney attracted over 20,000 people, however there was no sign of trouble as fans from both clubs enjoyed a Saturday evening out.

This weekend’s game between the Wanderers and Western United attracted only 7,500 fans but again there was no anti-social behaviour evident.

The Wanderers have long been a family friendly club, and the presence of a vast array of fans from different  backgrounds and generations has long been a feature of the clubs home games.

“The fans were well behaved last weekend and tonight,” said Andrea, a long time Wanderers member from Campbelltown. “I understand we do need police in case something goes wrong, but it was a bit over the top.

“I sit in the Eastern side of the ground, perpendicular to the RBB and never see any trouble. I don’t see much trouble in the RBB section either.

“One person lit a flare last weekend, but there was hardly any riot.”

The police presence in front of the RBB was very noticeable last weekend in the derby. The Cove, Sydney ’s active supporter group, were situated at the Southern end of BankWest Stadium, opposite the RBB. There were only a few police in their vicinity compared to the RBB, which saw police numbers increase after the flare was lit.

“It looked really bad that so many police were standing in front of the RBB, compared to The Cove,” said Lisa, a Wanderers fan from Penrith who attended the derby. “A few people were saying it was racist and they were targeting fans from the RBB because they were from western Sydney.

“I am not sure of the directive police get, but it wasn’t a good look. I know they lit a flare, but that is hardly the crime of the century and I don’t know if it warranted so many police.”

Bizarrely, some police even turned up to the corporate areas, where the premium seats are generally occupied by executives and their friends.

This week the RBB had a member kicked out for not allegedly sitting in his allocated seat while the RBB capo, who leads the chants, was also apparently banned for 12 months for swearing.

The RBB decided to protest in silence due to the issues.

They released a statement during the game on their social media channels, after a number of fans questioned why there was no active presence.

“We deeply apologise for the sudden no chanting tonight. But due to one member being kicked out for "not sitting in his seat" & tonight's Capo being banned for 12 months for swearing. Enough is enough of this police bullsh*t.”

The Wanderers are yet to publicly respond to the RBB’s statement but club management have worked hard with the police and stadium officials behind the scenes to try to ease the overpolicing of home games.

CEO John Tsatsimas has long advocated for active fans at football games to be understood and has worked hard with police bosses to enhance the relationship between fans, stadium officials, security and police. 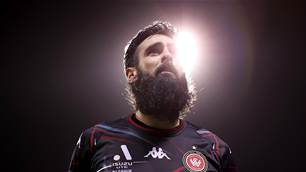