The 32-year-old playmaker will face his former club for the first time in Saturday's derby clash at their new home ground, Bankwest Stadium.

The Sydney rivals are the only teams with maximum points after two rounds.

Baumjohann will face a Wanderers side including their new German striker and former Bundesliga sharpshooter, Alex Meier, who opened his account for the club last week.

Babbel's squad for Saturday includes Bruce Kamau and Patrick Ziegler, neither of who have played a league game this season, and new import Nicolai Muller, who arrives from Germany on Friday morning.

He suggested Muller could be on the bench, though the German international hasn't played for five months since scoring for Hannover 96 in his last Bundesliga game back in May.

Baumjohann was released by the Wanderers after last season and Babbel said the classy midfielder had been unlucky as injury forced him to miss several games.

''It shows that my eye wasn't wrong because he moved to Sydney FC, so it shows he was a quality player," Babbel said.

"I wish him all the best, but not for Saturday."

Babbel insists this season's Wanderers have more playing quality than the 2018-19 squad.

Meier was one of several players recruited by Babbel as he overhauled the roster after last season's eighth-place finish.

Babbel adjusted his system last week to better utilise the the 196cm Meier, who was clearly underdone on his Wanderers debut which lasted just 58 minutes.

"You have to understand he's a big fella and if a big fella is not fit then he looks awful, this is normal," Babbel said.

"We changed the system a bit because Alex is a fantastic finisher, his strength is definitely in the box, not in transition."

Wanderers have won just one of their last 17 games against Sydney in all competitions, losing two of last season's league games by two goals and drawing the other one.

"Last year we always found a way to lose it, we were always in business, a couple of times we dominated the game, we created chances, we couldn't score," Babbel said.

"Then we did unbelievable mistakes to lose these games, so now is the time to concentrate all the 90 minutes, 95 minutes, however (long) it takes and do the things right." 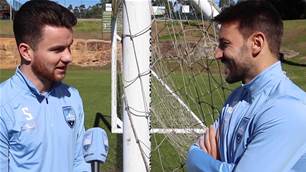 Baumjohann learning off Ninkovic 'every day'