The 34-year old will be playing outside his home country for the first time after amassing 299 games in 13 years for Swiss Super League side FC St Gallen.

Lopar, who has agreed to a one-year deal, joins Swiss international midfielder Primin Shwegler and former Newcastle Jets defender Daniel Georgievski as newcomers to the Wanderers.

Their German coach Markus Babbel is continuing to rebuild the roster after 12 players were released following their eighth-placed finish this season. 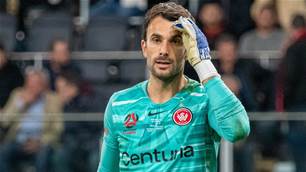