Western Sydney Wanderers have come from 2-1 down to score a 5-2 A-League win over Adelaide and win at home for the first time in seven matches.

Adelaide coach Gertjan Verbeek referred to Santa Claus and some of the great comedians to describe his team's shambolic defending in a 5-2 away loss to Western Sydney in an extraordinary A-League match on Friday.

Captain Mitch Duke scored a double as Western Sydney ended an six-game home drought without a win at Bankwest Stadium, stretching back to the Sydney Derby on October 26.

The drama carried on from the final minutes of their most recent encounter, when Adelaide were awarded two late penalties, with Wanderers holding on to win 3-2, after George Blackwood missed the second of his spot kicks.

Wanderers opened the scoring, trailed 2-1 and then scored three goals to lead 4-2 at the end of a stunning first half which produced 25 shots, 19 of them from the hosts.

Irish striker Simon Cox scored the only goal of the second half when he skilfully slotted the ball home in the 73rd minute after his initial attempt was blocked by goalkeeper Paul Izzo.

Wanderers moved to within four points of Brisbane in sixth while Adelaide dropped a spot to fifth after Wellington's win over Western United earlier on Friday.

"I grew up with Laurel and Hardy and Charlie Chaplin and the Comedy Capers, this was Comedy Capers the way we defended," Verbeek said.

Asked what he said to his players at halftime the droll Dutchman said "I asked them 'why the frustration?'

"I said we can win but we have to stop playing Santa Claus, Santa has already been in December, it's now February."

Wanderers' interim head coach Jean Paul De-Marigny was proud of his players and the way they responded to falling behind.

"I said at halftime the reaction to the setback was really positive they kept believing," de Marigny said.

"They continued to be aggressive without the ball and with the ball so that was really really pleasing."

While Wanderers have picked up seven points in his three games in charge, de Marigny said he had no expectations when asked if he thought the club would confirm his position for the rest of the season.

The goal glut started in the fifth minute when Pirmin Schwegler's free-kick from outside the penalty area deflected off Louis D'Arrigo, giving Izzo no chance.

The goal came after a lengthy stoppage after Duke suffered a facial cut when he was elbowed by D'Arrigo, who was booked following the incident.

He won a penalty converted by Riley McGree after being fouled by Daniel Georgievski and then bagged his fifth goal in the last six games via a fine right-footed shot from just outside the area.

It was then Duke's turn to shine with two fine strikes.

He pounced on a flick from Cox to lash the ball past Izzo and then powered a header home from a perfectly judged cross from Schwegler, before being substituted in the second half with a hip injury. 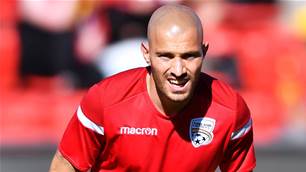 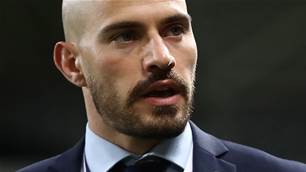