Western Sydney Wanderers have brushed off a gutsy Edgeworth Eagles to win 5-1 and cruise into the final eight of the FFA Cup on Tuesday night.

Green Gully continued their impressive Cup run defeating Melbourne Knights at home, while a dominant Bentleigh Greens needed extra time to breakdown a resolute Devonport Strikers and make it through the next round.

The winners join Blacktown City, Canberra Olympic, Melbourne City and Melbourne Victory in the quarterfinals of the national knock-out comp.

Bentleigh Greens have overcome torrential rain and a stubborn Devonport Strikers side to move through to the Westfield FFA Cup quarter-finals for the second time in three years after a 1-0 win after extra-time.

Despite having 34 shots to one in a dominant 90 minutes, the Greens were unable to get past heroic Devonport keeper Niko Giantsopoulos and his brave defenders.

Unfortunately for the home side, Canadian import Giantsopoulos was forced off with a shoulder injury after making yet another save just before the end of normal time.

And the visitors took less than three minutes to beat substitute keeper Thomas Pearce, with substitute Matthew Thurtell rifling a shot into the roof of the net.

It was no more than Bentleigh deserved after battering the home side all night in a match played in driving rain in front of more than 3000 fans at Valley Road.

Only some Giantsopoulos brilliance kept Devonport on level terms for the 90 minutes, making a string of sublime stops to further enhance his reputation as a gloveman of great promise.

But Bentleigh got the decisive goal and are now just one win away from another FFA Cup semi-final berth.

Western Sydney Wanderers are through to the quarter finals for after cruising past Edgeworth 5-1 at Magic Park.

Braces to Scott Neville and Brendon Santalab and a goal to Brendan Hamill ensured Tony Popovic’s side avoided joining Central Coast and Adelaide United as A-League sides to fall to NPL opposition in the 2016 Cup.

Wanderers dominated proceedings in Newcastle and took control of the contest with goals to Scott Neville and Brendan Hamill in the final 10 minutes of the opening stanza.

Neville looked to have sealed the contest just three minutes into the second half with a low drive past Eagles shot-stopper Jim Fogarty.

Former A-League golden boot winner Daniel McBreen pulled a goal back for Edgeworth on the hour mark to give the hosts some hope.

But substitute Brendon Santalab killed off the Eagles’ spirited fightback with a quick-fire brace in the final 10 minutes to secure a professional victory for the 2014 ACL Champions.

Green Gully came from behind to defeat Brimbank Derby rivals Melbourne Knights 3-1 and qualify for the FFA Cup quarter-finals.

Liam Boland was again the hero for Gully, scoring a double at Knights Stadium after Stipo Andrijasevic had given the home side the lead in the 23rd minute.

In the first match between the two Victorian clubs on the national stage since Gully's last NSL appearance in 1986, a crowd of 2,472 were treated to an entertaining tussle in Melbourne's north.

Boland levelled the scores with a header that went in off the crossbar just five minutes after Andrijasevic's opener, while Gully led at the break thanks to Nicholas Krousoratis' powerful 39th-minute strike.

Gully dominated the second half and - after Knights substitute Damien Miskulin was sent off with 17 minutes remaining - Boland wrapped up victory for the visitors.

Nikola Jurkovic tripped Jay Davies in the penalty area and Boland, who scored a stunning winner to eliminate Central Coast Mariners in the Round of 32, converted past Fraser Chalmers as Gully surged into the FFA Cup's last eight.

At Dorrien Gardens there were chances aplenty for both sides but clinical finishing was lacking till Milos Ninkovic and Alex Brosque smashed home sensational extra-time goals to win it for the Sky Blues.

In front of 2,661 fans, Liam Reddy was in fine form all night keeping Glory in goal with a super stop to deny Holosko on 15 minutes.

Ninkovic should’ve scored for the visitor moments later missing an easy chance as both sides pressed for the opener in a feisty first 45 minutes.

Both were unable to break deadlock in the second half with the dangerous Adam Taggart going close for the home side.

Perth brought on new signing Milan Smiljanic  in the second half as the clock ticked towards the 90 minutes.

Reddy made a brilliant double stop to deny Sydney in the final few minutes as the game went into extra time.

Both sides fatigued as the game slowed somewhat but Bobo should’ve scored had it not been for the excellent Rhys Williams and a super goal-saving tackle.

However, with Bobo taking defenders away, Ninkovic powered through the home defence, angling inside and hammering a stunning goal past Reddy in the first half of extra time.

And Brosque, a late sub, smashed home a second in the second half to seal the deal as the Sky Blues progressed to the final eight. 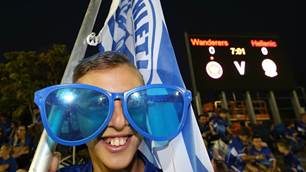 FFA Cup Round of 32 pic special