The three additions to the Wanderers playing group for the 2018/19 season will bring speed, strength and fantastic collective Hyundai A-League experience to the group.

Wanderers CEO John Tsatsimas said the trio of signings were secured to ensure the club brought in some of the best Australian talent in the A-League.

“During the season there were some players that we identified to bring into our squad for the 2018/19 season and we are delighted to announce them today,” Tsatsimas said.

“Bruce and Ruon are fantastic young talents that were identified earlier this season and we are very happy to have secured their signatures for the next two seasons.

“Nick Fitzgerald is a Blacktown boy who has blossomed in the Hyundai A-League over the past eight seasons. Having players who are born and bred in Western Sydney playing for the club is a tradition we want to continue.”

A Western Sydney local, Fitzgerald returns home for the first time in his career having played over 150 matches in the A-League scoring 16 goals.

The Blacktown City product had another standout season in the league with his pace and energy a highlight of his attacking play, and joins the club on a three-year agreement.

“I’m a Western Sydney boy so to be able to come back home and play for this club is a great opportunity for me and I’m looking forward to starting,” Fitzgerald said.

“I played all my junior football just around the corner for Blacktown City. When I was growing up, we didn’t have the Wanderers so I’m delighted to be a part of it now.

“I think that’s the great thing about the club, they really connect with the fans and with the community and that’s always something I’ve wanted to be a part of and to be able to go out and play for this club and represent where I’m from is a great opportunity.”

Kamau, 23, joins on a two-year-deal after clocking up more than 70 games in the Hyundai A-League and will bring added speed to the Wanderers front-third.

The Kenyan-born winger made his professional debut in 2014 after playing his youth football in Adelaide at clubs including Adelaide City, Adelaide Olympic and Campbelltown City SC.

“I’m excited to start a new chapter and to be at Western Sydney Wanderers,” Kamau said.

“It’s a club that has had a lot of success in the past and I’m hoping to have some more success there with the squad for the two years that I will be here.”

“I’d love to win another Premiers Plate, title and a FFA Cup. Definitely, those three trophies are what I¹m hoping to add to my resume while I’m at the Wanderers.”

Tongyik, another Adelaide product who arrived in Australia from Sudan in 2003, played much of his junior football for Adelaide Olympic before progressing through the Adelaide youth system, making his debut in the Hyundai A-League with Melbourne City in the 2016/17 season.

A powerful defender, the 21-year-old will link up with the Wanderers on a two-year deal that will keep him with the club until at least the end of the 2019/20 season.

“I’m definitely excited for the move and I really can’t wait to get started and look forward to wearing the Red & Black,” Tongyik said.

“When I arrive at the Wanderers I want to continue to improve, to show that fans why I am here – to help the team and win things.” 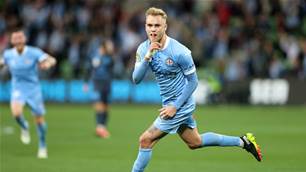 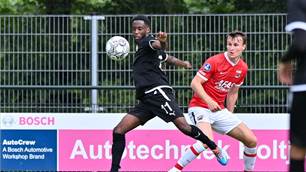