After four wilderness years on Wanderand, coach Carl Robinson admits - as he enters his second season in charge of Western Sydney Wanderers - that it’s make or break.

When you have best stadium in the A-League, the competition’s most raucous fans, a state-of-the-art training base and a supportive billionaire owner, the cards are stacked in your favour.
Yet, even taking into account a gifted collection of emerging young talent, Wanderers have been spectators during finals football since 2017-18, with four different managers at the helm.
Chairman Paul Lederer’s reservoir of patience runs only so deep, and 52-cap Welshman Robinson knows he must deliver.
“Pressure is part and parcel of football,” Robinson told FTBL ahead of November 20’s derby opener against Sydney FC at CommBank Stadium.
“Last season six teams didn’t perform to their level to make the playoffs, and we were one of them.
“I take responsibility for that and that will drive me even further. This season reaching the top six is a minimum requirement. There is no bedding in period.
“When you’re at a club this size, and you work with a great chairman like I’ve got, the expectations increase, which is fine.
“That’s part of the job but then you have to do your job.”
Whilst the merest whiff of failure can topple a coach off his trapeze, Robinson is looking to fashion something lasting.
“This is about building foundations for the long-term,” he said. “Coming here was never a six-month, quick fix type of scenario.
“Managers do come and go, players come and go but the ownership will remain and most importantly the fans will always be there. So you want to make your mark.
“We need to reignite everything at this club and the group of players I’ve assembled have the opportunity to do that.”
If Wanderers are as astute and expressive on the field as their coach is off it, then perhaps happier times might lie ahead.
“Last year was a bit of a rollercoaster, there was a lot of good stuff but there was a bit of inconsistency as well,” added Robinson.
“Finding a balance of trying to integrate and play young players whilst also winning is the hardest thing to do in modern football.
“What I wanted to do was both but unfortunately it didn’t happen last season.
“That’s why I’ve shuffled the pack a bit and made some hard decisions.”
Though two visa spots still remain, Robinson is leaning heavily on Aussie ingenuity by repatriating seasoned campaigners like Rhys Williams, Terry Antonis and Dimi Petratos.
“They’re good solid Aussie players and good characters as well, he said.
“I think we have a little bit of a better balance for the season. We maybe had too many experienced attacking players not playing as much as they’d have liked year.” 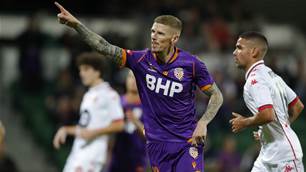