Over the past six weeks the 21st annual football festival that celebrates the African community has been played at the Wanderers 10-pitch home base, after a partnership struck between the African Nations Sports Association (ANSA) and the Wanderers.

The colourful and vibrant tournament culminated with a breathtaking finale yesterday. After a spectacle that had to be seen to be believed, Ghana were crowned the 2021 NSW African Cup champions after an epic victory over hot favourites South Sudan.

In a game that befitted the occasion, the Black Stars triumphed 6-5 in a tense penalty shootout, after the Bright Stars showed great heart to come back from 4-2 down late in regulation time to dramatically level the game at 4-4 after a last minute penalty.

Ghana then scored in the second period of extra time to lead 5-4 before South Sudan sent the game to penalties with another late and equally dramatic equaliser.

In front of a jovial crowd that sang and danced their way through 120 minutes of intense, brilliant and at times heart-stopping football, both teams played with the skill, spirit, flare and flamboyance that so epitomises the African and indeed the western Sydney community.

Earlier in the day, the women had their chance with Zimbabwe beating Democratic Republic of Congo 3-2 in a thrilling Women’s Challenge Cup game.

Wanderers CEO John Tsatsimas was thrilled with how the the tournament went, and was particularly impressed with the final.

“One of the most remarkable games I have ever witnessed,” praised Tsatsimas. “We at the Western Sydney Wanderers FC are honoured to have been able to host the NSW African Cup tournament at our Centre of Football.

“The Cup Final was one of the most amazing games that finished 5-5 after extra time, before an outstanding Ghana were the victors on penalties over the fantastic South Sudan team.

“Thank you to all the teams that participated and to the African community for embracing us as much as we love having you as an important of part of our football family.

“We look forward to seeing you all again next season.”

The Wanderers are keen to host a number of community events at their Blacktown base, and while Covid19 has restricted their movements somewhat in 2020, the club has tremendous plans going forward as they look to connect with their own backyard. The African Cup was a prime example of what the Wanderers hope to achieve.

“Western Sydney Wanderers FC are based on the principles of community and inclusion,” said Tsatsimas. “This was never more evident than at this event.

“The Wanderers Centre of Football is not just an elite facility but will be a community asset as we deliver a wider and more strategic community program in one of Western Sydney’s biggest growth areas and a heartland of football.”

The Wanderers hosted their traditional Schools Cup this year at Blacktown, with 51 teams from schools across western Sydney taking part in four separate competitions in November.

The club will also hold a girls only school holiday clinic at their home base from 13-15 January.

The W-League team will also play their final home game of the season against Perth Glory at the Wanderers Centre of Football in March. This is on the back of the club hosting several A-League and W-League friendlies against local NPL teams during the current pre-season.

Club members will also be treated to some unique opportunities at the Wanderers Centre of Football, as the Red & Black look to reward their most loyal fans.

“We are looking to bring our fans to us and show them what we have,” beamed Tsatsimas. “We are located in the heart of western Sydney and are accessible to everyone in our community regardless of cast or creed.” 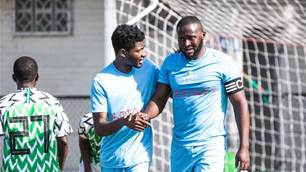