In kayak fishing, there’s no big boat to hide in, it’s just angler vs the water, one-on-one.

In kayak fishing, there’s no big boat to hide in, it’s just angler vs the water, one-on-one. 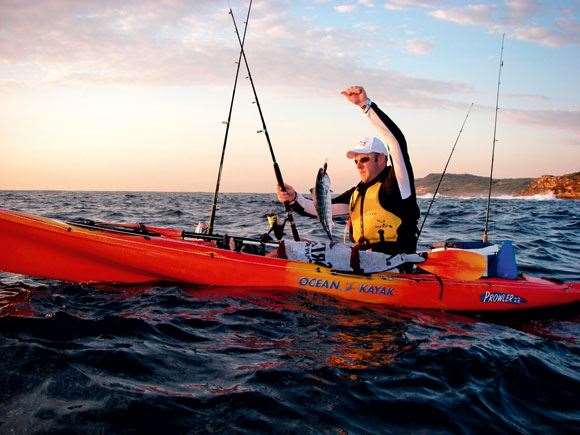 Can be as hi-tech as Dave Gleeson’s set-up. Images: Kerry Wilson

Dave Gleeson got into kayak fishing five years ago. He wasn’t an angler, he just wanted to get fit, so he bought a kayak. “And the first day I went out paddling,” he says, “I looked over the edge and thought, ‘Hello! There are fish under there. Might chuck a rod in next time.’ That afternoon I drilled a couple of rod holders in my boat.”

Gleeson now runs Australia’s largest kayak fishing forum – akff.net. When he first clicked on the site four years ago, there were around 500 members. That number has since swollen to 5000. There are now kayak fishing tournaments entered by hundreds of gun anglers with thousands of dollars of prize money on offer. What was a boutique past-time is becoming a big presence on the fishing stage. Ask Gleeson what the appeal is and he goes back to that day when he first drilled two rod holes into the freeboard of his kayak. “It’s so simple, so easy, so affordable. A lot of the guys I go out on the kayak with have had motor boats and they’ve spent 20 grand on the things. And when they just want to duck out for a quick fish, they’ve got to get down to the boat ramp, get in the bloody queue, put petrol in the thing, insure it, register it and when they get home they’ve got to clean it out. It’s a bit of a stuff-around. The appeal of the kayak is you just grab it, throw it on the roof of the car, drive down the road, throw it in the water and away you go. You can paddle down secluded creeks a foot deep and fish for bass and bream, or you can head offshore for the big pelagics. The simplicity – that’s the appeal for a lot of people.”

But it doesn’t have to be as simple as drilling a pair of rod holes in your plastic kayak and paddling away. Watch a posse of serious kayak fishermen prepare for a morning on the water and you’ll gape at the array of gear that can be fitted to a 3.5m-4m long craft. There are banks of rods, down riggers with fist-sized lead weights, sonar depth sounders, GPS units, anchors, life jackets fitted with radios, flares and EPIRBs. You’ll even see one or two particularly keen anglers strapping eight-inch hunting knives to their legs, adding a note of hazard to the whole thing, as if they’re about to slip over the side of their kayaks and re-emerge with giant ink-smeared squids draped over their shoulders. The kayaks themselves are all of the sit-on-topvariety, but come in different lengths – the shorter boats (3.5m) are slow and sturdy, the longer ones (4.5m) fast but tippy. Some of the boats are traditional hand-paddled kayaks, others are hands-free pedal-powered craft with two rubber fins jutting from their belly. 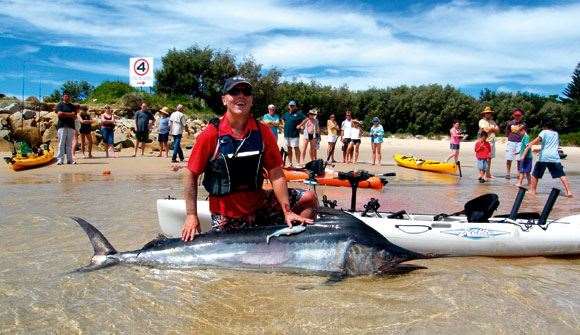 And on this morning, as the anglers shoulder their kayaks down to the cold sand of Shelley Beach on Sydney’s North Head, Gleeson tells a story. It was February last year and a mob of them were trolling the reefs off South West Rocks on the NSW north coast. It had been a quiet weekend. And as Sunday morning turned towards a drowsy arvo, it looked like it was going to be another unsuccessful day. One by one the kayaks turned their noses towards the shore. And it was then, a tick before midday, 200m off the cliffs, that Paul O’Leary felt an enormous jolt on his boat. His line went taut. He turned to see a sizeable marlin launch into half-a-dozen spiralling leaps. Then the fish, the hook in its mouth, began its drive towards the deep water. “And he was surfing along behind this thing,” says Gleeson. “He was getting pulled like a waterskier, he was motoring along.” All O’Leary could do was white-knuckle his rod and steer his boat side-on to increase the drag. A bunch of them set off in pursuit. “Just to make sure he didn’t end up in New Zealand,” laughs Gleeson. Paddling full-pelt, they could only just keep up.

After half an hour the fish was exhausted. It flapped frantically on the water’s surface, then dropped and hung in the deep water. O’Leary looked over his shoulder: the cliffs were a distant smudge – the marlin had dragged his boat three kays offshore. Gradually O’Leary clawed the fish in. Its strength came in spurts; it would seem beaten before jolting into action and making a frenzied dash for deep water. The kayakers who had chased O’Leary and his fish out to sea formed a horse-shoe around the marlin and corralled it towards shore. When they finally got the thing onto the beach, O’Leary collapsed on the sand. It had been three hours of fierce wrestling. He vomited. When he got to his feet he swayed and buckled like a drunk. 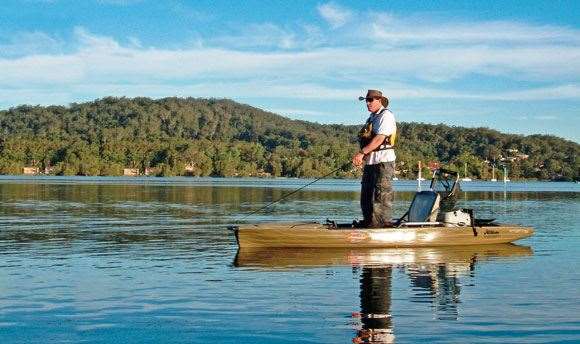 It took three blokes to manhandle the fish into the back of a waiting ute. It clocked in at 78kg, 2.5m – an Australian record for a kayak-caught fish. That night they ate barbequed marlin steaks. The next morning they set off home with their eskys full of marlin steaks. And in Gleeson’s story you see the gold-seam in kayak fishing. A primal contest between fish and man; a contest unsullied by big boats and throbbing diesel engines. “It’s very one-on-one with water,” says Gleeson. “You’re not up in a boat; you’re not relying on anything to get you around. You’re reliant only on yourself. And being right there, down on the water, you can see the fish, you can hear the splashes on the water.” It’s the sort of thing that would’ve turned Hemingway to mush.

As Gleeson pushes his kayak into the briny, and runs a last check over his gear, you can’t resist asking the obvious question. What about sharks? After all, it was front page news on Boxing Day ’08 when a five-metre great white was filmed sniffing around a pair of kayak fishermen off Sydney’s Long Reef Beach. The shark tipped one into the water, then circled the boats for ten minutes. Gleeson laughs – after all those two blokes were members of his online forum. “That’s the first question everyone asks: aren’t you afraid of sharks? Yes, you’re aware of sharks, you know they’re there somewhere; you don’t see a lot of them but of course they’re there. But as long as you’re not catching fish and having them flap in the water and bleeding all over your boat – that’s what’ll attract the sharks. Plus, there hasn’t been a single shark attack on a kayak fisherman in Australia. There’ve been a few blokes who’ve been nudged; sharks come up and sort of ‘mouth’ the kayak. But there are no figures or statistics to say that fishing out of your kayak is any more dangerous than fishing out of any other boat.”

Of course, it was Hemingway’s The Old Man And The Sea that told the story of old Santiago pulling the monster marlin out in the Gulf Stream, then tying the fish to the side of his boat and heading for shore, only to have swarms of mako sharks strip the marlin back to its vast tail. Gleeson reckons there’s no chance a kayak fisherman would make the same mistake. “Most guys aren’t going to catch something if it’s not manageable. If it’s too big and you literally can’t get it onto your boat, you’re going to have to let it go. And most blokes do; most blokes out there will catch and release. They enjoy the fight and the capture, they’ll get the fish to the boat and then they’ll let it go.”