Having opted not to join his fellow internationals in their exodus from the A-League, Melbourne City's Craig Noone says he's looking forward to getting out on the park and helping City win it's first Grand Final.

Sitting in second place on the A-League table, City is set to recommence their 2019/20 campaign on Saturday, August 1 when they take on Sydney FC at ANZ Stadium.

The Cityzens had originally been scheduled to commence their campaign against Western United, possibly in Melbourne, on July 20 – only for a spike in cases to force them, alongside Western and Melbourne Victory, to scramble to cross the NSW border.

They were then forced to enter a two-week quarantine period, which is set to end on Saturday morning and allow the team to relocate to the Hunter Valley ahead of their remaining three regular season games and finals.

“It’s difficult circumstances for everyone but we’re taking the positives out of it. We came here to do one thing and that’s win the Grand Final, so that’s our aim and that’s what we’re all working towards.

“It is quite unique; you go on pre-season camps and you go abroad and spend a couple of weeks at one time, but I don’t think it’s ever been this long. It will be two weeks tomorrow, but then six weeks in total or maybe even more.

“It took a bit of getting used to, the first couple of days was hard for everyone but as we’ve got settled and into a routine, it’s been a lot easier. We’ve been training well and training hard. It all just comes down to what we’re here for and what we’re working towards.”

City’s squad emerged largely unscathed from the four-month hiatus between the A-League’s suspension and resumption – their sole departure coming in the form of Athletic Bilbao legend Markel Susaeta, who returned to Spain for family reasons.

Susaeta is one of a number of international players that have exited the competition during the break, with Melbourne Victory’s Ola Toivonen and Tim Hoogland and Western’s Dario Jertec and Panagiotis Kone among the other departures.

“I think it’s difficult for everyone, everyone is in the same situation,” Noone responded when asked if he’d considered returning home to England.

“We’ve all got families and partners that are based everywhere, it’s difficult for everyone.

“But I’m lucky, I’ve got no children, I’ve got a fiancé that was in Melbourne but we managed to get her on a flight back to England and once that was sorted, and she was all sorted and on her way back to her family, I was ready looking forward to getting over here and getting on with the season.”

Having also chosen to stay in Australia, City Head Coach Erick Mombaerts identified the defensive side of the game as an area of concern heading into the A-League’s resumption – particularly set pieces and moments of transition.

While City’s attacking bona fides this season have now been established under the Frenchman, their 42 goals scored trailing only Sydney FC in 2019/20, it has come at the cost of a leakier backline.

With 34 goals against, the club has already conceded two more goals than they did throughout the entire 2018/19 campaign under former Head Coach Warren Joyce and, of their potential finals opponents, only Adelaide United and Newcastle Jets have conceded more.

With just three games remaining and needing to take maximum points from to help prevent Wellington Phoenix from leapfrogging them on the table – something which they would be unable to stop regardless should Ufuk Talay’s side win their remaining four games –it’s an area City will need to improve upon rapidly before finals are upon them.

“We’ve all been working hard and the coaches, they’ve had a lot of time to plan sessions to get us to work on what they want us to target,” Noone said.

“I like to think we’ve been doing that in training and the practice games. We like to think we’re improving in every way and getting ready for that first game. I think you will definitely see a team that’s fit and knows what they want to do and what their job and each other’s jobs as well.

“We’re doing that type of work now to be ready for that first game – to get the chemistry and stuff.

“We’ve been working on that now and the last couple of weeks and when we were in Melbourne just to nail it down so that come the first game and the other games and the finals we’re raring to go.” 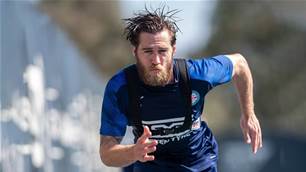