Perth Glory will have to complete the season without one of the greatest ever A-League players, but midfielder Neil Kilkenny isn't worried.

Perth Glory midfielder Neil Kilkenny is confident his team can overcome the loss of star playmaker Diego Castro to challenge for this season's A-League title.

Castro, who is widely considered one of the A-League's greatest ever players, has stepped away for the rest of the current season due to fears over the coronavirus situation.

The 38-year-old's absence leaves a massive hole in Glory's midfield.

But Kilkenny was quick to point out that Castro only started in 15 of the club's 29 games last season in a campaign that saw them claim the Premiers Plate and make it through to the grand final.

"He gets a lot of plaudits for the things he does on the ball, but people have to cover for him as well to let him do his stuff," Kilkenny said.

"You guys always go on about it, but like I said he started 15 games last year and we won the league. Maybe that says a lot.

"He missed seven of the first 11 games and we were quite a distance ahead (on the ladder) by that time, so that says a lot."

Castro's absence has been compounded by the return home of defenders Gregory Wuthrich (Switzerland) and Kim Soo-Beom (South Korea).

Glory coach Tony Popovic says emerging star Nicholas D'Agostino is unlikely to be considered for Saturday's clash with the Mariners after failing to maintain fitness standards during the COVID-19 shutdown.

It means Popovic will have to dig deep into his reserves to fill the gaps.

Kilkenny said he never hesitated in deciding to join his teammates in their NSW hub to complete the season.

"It was very easy for me. I didn't want to let my teammates down and my club down, I wanted to play," Kilkenny said.

Glory sit in fifth spot on the ladder with six games remaining in their home-and-away campaign. 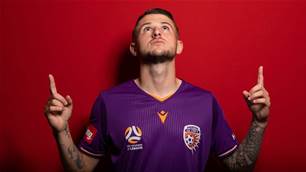