Newcastle Jets have thumped Adelaide United 3-0, with Roy O'Donovan, Matthew Millar and Steven Ugarkovic all scoring, in their A-League match in Adelaide.

Newcastle Jets have put a severe dent in Adelaide United's A-League finals ambitions with a 3-0 away win.

Adelaide have now leaked 15 goals in four consecutive losses which have derailed their campaign.

The seventh-placed Reds could have climbed back into the top six with a win or draw.

But they were comprehensively outplayed by Newcastle, who rose to ninth on the ladder with their fifth win this season.

"It's a fantastic result for us," Jets coach Carl Robinson said.

"The first half, we played average with the ball ... the second half was much more like us and obviously we got the goals at crucial times."

Newcastle scored in the 41st minute with a slick passage culminating in O'Donovan's tap-in before 4286 spectators - possibly the last crowd allowed into an A-League game this season amid the coronavirus crisis.

Adelaide's Riley McGree lost possession in midfield and Newcastle's Ugarkovic swooped, lofting a superbly weighted pass into the path of Dimi Petratos who was steaming down the right flank.

Petratos didn't break stride and, on his first touch, played a delightful square ball past Adelaide defenders Jordan Elsey and Michael Jakobsen for a perfectly placed O'Donovan to score from a metre out.

After taking a 1-0 lead into the halftime, the Jets blew Adelaide away with two goals in three minutes just after the restart.

In the 51st minute, Jets stalwart Nigel Boogard sliced United's defence with a shrewd long-ball which found Millar, who duly scored with only 'keeper Paul Izzo to beat.

Three minutes later, the visitors added a third when Ugarkovic netted the sweetest of headers from 10 metres out from a Robert Burns cross.

Verbeek threw youngsters Mohamed Toure and Kusini Yegini into the frontline but the emerging duo couldn't change the tide.

"We give it away in five minutes in the second half," Verbeek said.

"It was not very good defending." 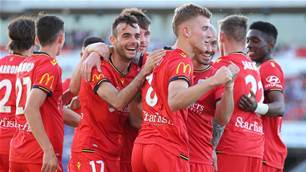