Coaches Mark Rudan and Carl Veart were both left fuming after controversial decisions in the goalless draw between their sides.

VAR and controversial decisions by match officials again dominated proceedings as 10-man Western United held on heroically for a point in a goalless draw with Adelaide United at Coopers Stadium.

After having Victor Sanchez expelled in the 35th minute for a second bookable offence on Friday night, Western thought they'd pinched an unlikely winner on 78 minutes.

Dylan Pierias found the net after racing onto a delightful through ball from Alessandro Diamanti, only for it to be ruled out for offside by VAR with replays indicating it was a matter of millimetres.

Western United coach Mark Rudan highlighted inconsistencies with the technology used in the replay and the drawn lines to determine if any part of Pierias's body was ahead of his opponent when the ball was played.

"What constitutes an offside, I have no idea," he said.

"When I saw the line that they chose, Ryan Strain was from his chest... and Dylan was at the largest or the highest point (his shoulder), the worst point for it to be offside.

"For me, there's inconsistencies there. If you're going to do it, do it both from their shoulder, which was the farthest point away - and then he's onside.

"That's one issue I've got. The other issue is the thickness of the line. I think the line should be made thicker which gives the advantage to the attacking team. We're talking about millimetres here."

Western also had a goal ruled out in the first half when Tomi Uskok got on the end of a Diamanti free kick, setting up Besart Berisha for a tap in.

The goal was eventually chalked off with officials judging the ball had ricocheted off the arm of Uskok.

Rudan also questioned a number of decisions by the match officials, including the involvement of the fourth official who alerted referee Chris Beath to the infringement by Sanchez which resulted in the second yellow card.

When asked if he felt his side were robbed, Rudan agreed.

"From the second yellow card send off, to the accidental hand ball that led to a goal," he said.

"To what I thought was a fantastic run and an even better ball by Diamanti that was ruled offside.

"Where does it end?

"We got robbed, it's a simple as that and I'll use your words, they're not mine."

Adelaide coach Carl Veart echoed Rudan's sentiments and said the flurry of five first-half yellow cards from Chris Beath were questionable and set the tone for the match.

"In my opinion, all those yellow cards in the first half, there was hardly anything in them," he said.

"And once you start giving silly yellow cards like that, you just make it very difficult for yourself.

"I think he lost control and that's what happens." 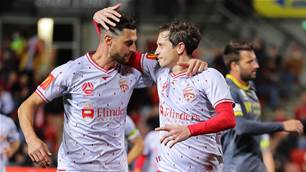 Reds keen to bounce back against Victory