Wellington Phoenix coach Ufuk Talay is confident his side can turn around a winless run of eight games to mirror last season's stunning climb up the A-League ladder.

After Sunday night's 2-1 loss to Newcastle Jets, Phoenix are winless from their first three games to start the season, which is a similar start to their last campaign.

The Nix were bottom of the ladder until round seven before a winning streak catapulted them up the table to finish third - although they won just one match in their final seven games.

"Result-wise we've started slowly but footballing-wise, I don't think we have," Talay said after Sunday's loss.

"Last season it was start from scratch, but this season we've maintained the core group of players who understand how we want to play, so I'm sure we'll come out of this pretty quickly.

"Last season was four months ago.

"We started pre-season this year and our focus is on this season.

"Winning games builds confidence and that's what we need at this stage, to win one game and I'm sure the run will start then."

It's a worrying sign for the Nix, who next play ladder-leaders Central Coast Mariners in Gosford on Sunday.

But for Wellington's flaws, the Jets were tough for their first win of the season inspired by Roy O'Donovan in Wollongong.

Jets sensation Valentino Yuel ran onto a superb ball from O'Donovan to give Newcastle the lead after eight minutes.

Wellington pulled back a late goal via Ulises Davila from the penalty spot but were unable to complete the turnaround.

Meanwhile Perth Glory and Melbourne Victory will quickly move on from their respective A-League defeats as they prepare to face off at AAMI Park on Tuesday night.

Both teams have only played two games amid the rescheduling caused by changing border restrictions, with Perth on one win and Victory winless.

Three days after beating Adelaide 5-3 in their season opener, the Glory came off second-best in Saturday's 5-4 thriller against Western United in Geelong.

United's Steven Lustica scored a late winner while youngster Dylan Pierias landed a brace and Tomoki Imai and Victor Sanchez also scored for the home side.

Both teams will have little time to lick their wounds, with a focus on recovery and preparation for Tuesday's game - before Victory back up against Western United on Saturday and Perth do the same against Melbourne City on Sunday.

Central Coast's rejuvenation continued when they beat reigning champions Sydney FC 2-0 on Friday night to return to the top of the table.

The Mariners faced a tight turnaround off the back of Tuesday's 1-0 loss to Western Sydney but seemingly weren't fazed against the reigning champions.

Sydney centre-back Ben Warland scored an own goal in the 53rd minute before Mariners teen sensation Alou Kuol sealed the three points in the 74th. 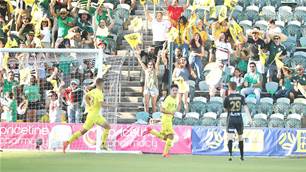 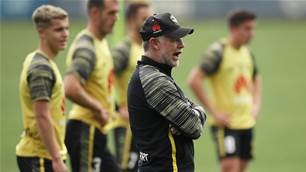