Socceroo Mat Ryan is uncertain when he'll return to Brighton and Hove Albion, especially after three of his teammates tested positive for coronavirus.

Socceroos goalkeeper Mat Ryan remains in the dark as to when he'll be required back at Premier League club Brighton and Hove Albion.

While the UK club has been hard-hit by the coronavirus, Ryan has been back in Australia during football's shutdown, training in isolation in NSW.

A third player at Brighton tested positive for the virus over the weekend and Ryan said he was uncertain where the Premier League's return to play stood.

"As for moving forward ... we're all pretty much still in the dark with it all," Ryan said in an Instagram interview with Optus Sport on Monday.

"With all the uncertainty that's going on at the minute - you guys honestly know as much as me.

"(In) the UK .... Boris Johnson addressed the public last night. And I think today (UK time) there's a Premier League meeting as well.

"So hopefully when I wake up tomorrow morning I'll know a little bit more moving forward and have some more clarity.

"But apparently, another one of our players has picked up the virus which is unfortunate but he's in a pretty good place now at the minute - he didn't really feel any symptoms so it's just one of those cases."

Ryan was uncertain whether his teammates' positive tests would affect the timing of his return.

He is among the overseas-based Socceroos to return to Australia, while Brighton teammate Aaron Mooy has remained in the UK.

"I'm in communication with the club every day. I wasn't going to be making any drastic movements before these meetings were occurring ... so hopefully, I can wake up tomorrow morning and have a bit more clarity.

"But it's just going to be depending on what the details of the lockdown are going to be from the UK government and the Premier League will then be able to put a plan together on what they can and can't do.

"So I'm trying not to get caught up in it all, I'm just trying to live my life based on the facts that I'm receiving." 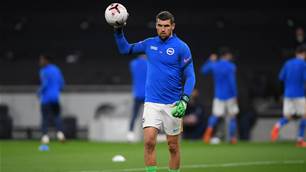